You are at:Home»Current in Zionsville»Whitestown community shows support for officer with Guillain-Barre Syndrome 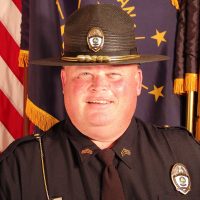 Sgt. Dan Boutwell has been a fixture around Whitestown for 22 years. First serving as a part-time deputy town marshal from 1994 to 2008, when the Whitestown Metropolitan Police Dept. was created. Boutwell then served as a part-time lieutenant detective with WMPD until joining the department as a full-time public safety officer in January 2013.

“A household name you might say,” Whitestown Police Chief Dennis Anderson said. “Dan is that guy you know you can always count on, to lend a hand regardless, day or night. An iconic figure within WMPD.”

But in May, the 49-year-old Boutwell was diagnosed with Guillain-Barre Syndrome following a blood infection. Guillain-Barre is a rare disorder in which the body’s immune system attacks the nerves. Weakness and tingling in the extremities are usually the first symptoms, which can quickly spread, eventually paralyzing the whole body.

Boutwell had worked the day before being admitted to the hospital and has been hospitalized ever since. 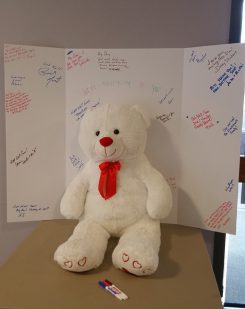 A card and teddy bear are available in the Whitestown Municipal Complex for members of the community to sign. They will be delivered to Sgt. Dan Boutwell June 20. (Submitted photo)

“Much like everyone fighting a debilitating attack on the body, Dan has both good and bad days. During the first couple of weeks, I am certain he would describe them as more bad than good,” Anderson said. “This week perhaps a little more even. I cannot even begin to imagine what it would be like to go from total mobility to total reliance on someone else at the snap of a finger.”

To help keep his spirits up, Anderson said Boutwell’s Town Hall family has designed a “BIG” Get Well card. The card and a large teddy bear,are in the lobby of the Whitestown Municipal Complex and are available for the public to sign through June 19. The card and bear will be delivered to Boutwell June 20.

“Even through the pain, he tries to keep a smile and always asks, ‘How are things going?’ when you first walk in to visit him,” Anderson said. “A gentle giant who refuses to give into pain or the limits. We try to have officers visit as much as possible, and I try to go see him every other day myself.”

As for his prognosis, Boutwell and his wife, Kim, are convinced he will make a full recovery, an opinion reinforced by his doctors as well, according to Anderson.

“The bigger question now that remains unknown is the length of time his recovery will take and what that recovery looks like long term,” Anderson said. “We want him back, and back soon.”