You are at:Home»Current in Carmel»Pauley visits The Barrington to share decision to reveal bipolar disorder 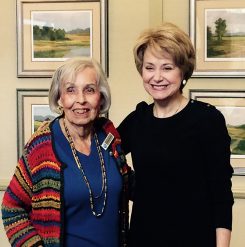 The Barrington of Carmel resident Barbara Busche, left, said she enjoyed meeting Jane Pauley in person, as she used to watch her a lot on TV. (Photo by Mark Ambrogi)

“Because (her life) wasn’t that interesting,” Pauley said, drawing laughs from the audience during an appearance June 7 at The Barrington of Carmel, a retirement community.

The former “Today” and “Dateline” co-host and Indianapolis native, Pauley said she and her husband Garry Trudeau, cartoonist and Doonesbury comic strip creator, had interesting jobs but led ordinary lives.

“Garry and I raised three kids with five mini-vans,” said Pauley, who graduated from Warren Central High School and Indiana University, holding her first TV job at the Indianapolis CBS affiliate (then WISH-TV).

Then Pauley, now 65, was diagnosed with bipolar disorder in 2001.

“It’s been 15 years since my first, and so far only, episode with bipolar disorder,” said Pauley, who added she takes medication daily.

She took a six-month break from “Dateline” but only family and close friends knew why.

“I knew then there wasn’t a lot of spokespeople for mental health,” Pauley said. “At 50, I had been in television almost 30 years. I had a good reputation for being normal and down-to-earth and level-headed.”

Pauley said those descriptions became ironic to her given her diagnosis.

“When I got better, I resolved I would talk about it,” Pauley said. “I could use some of the personal goodwill that I built up over the years on behalf of people who were not as comfortable as I was in talking about a personal illness.”

“The next day was 9/11, and I won an Emmy that week for our coverage,” Pauley said. “To be a journalist that week was one of the few professions that made sense. My husband is a cartoonist, that didn’t make much sense to him. With 9/11, my interest in my memoir waned. It was: ‘Really, Jane, who cares about your life?’”

She shelved the book until one day her husband said he read the sample chapters she sent him two years ago while on a plane.

“He said, ‘I think if you still think you have a story to tell, I think you are equipped to tell it,’” Pauley said. “I interpreted that to mean — you’re not a bad writer. I don’t think you’ll embarrass yourself.”

Thus came “Skywriting: A Life Out of the Blue,” making bipolar disorder public, in 2004.

Pauley is now a guest host on “CBS This Morning.” Her most recent book is “Your Life Calling: Reimagining the Rest of Your Life.” She signed her book after her interview with a moderator.