You are at:Home»Current in Fishers»HSE acquiring 35 new school buses 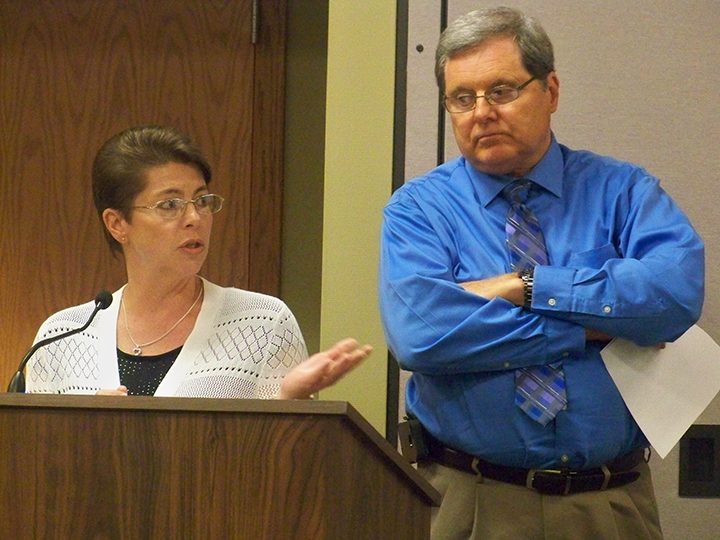 Hamilton Southeastern Schools Business Manager Cecilie Nunn and Director of Transportation Jim White present their report to the school board proposing to enter a lease-purchase agreement for 35 new school buses before next school year. (Photo by Sam Elliott)

Hamilton Southeastern Schools’ fleet of approximately 300 total school busses will include 35 brand new ones before the upcoming 2016-17 school year begins.

At its May 25 meeting, the HSE school board approved a plan to enter into a lease-purchase agreement for the new busses.

“Two of these busses are actually going to be additions to the fleet and are needed because we have some new kiddos coming. The other 33 are replacements for busses that are at least 12 years old,” HSE Schools Business Manager Cecilie Nunn said. “We’ve had a number of years where enrollment has been increasing so quickly that most of the busses we were buying were to accommodate those new kids. We really haven’t had much of a chance to kind of catch up on those older busses and replace them, but now that our enrollment has slowed just a little bit we’re able to go back and replace some of those older units. It really makes sense for us to replace these older busses. The older they are, the more expensive they are to maintain. By replacing these with newer busses, we’re going to have savings in our transportation operating fund, which we pay for our repairs from.”

Repairs and maintenance on the 33 busses being replaced has cost the school district more than $87,000 in the past year.

“Busses when they get to be 10 years old have really had it,” HSE School Director of Transportation Jim White said. “Our annual mileage is 2.9 million miles. Our daily average is 14,000. The average bus gets about 9,900 miles per year … all the stops wear them out. Stop and go, stop and go is really hard on a bus.”

The district will enter a three-year lease-to-own agreement with Kerlin Bus Sales and trade in the busses being replaces for a credit on the new vehicles.

“Kerlin actually agreed to extend last year’s price to us, which is a good thing and there’s some savings there — about $170,000,” Nunn said. “Every year there are new requirements that come out and make those busses more expensive, so anytime we can order off a previous bid that’s good news … The plan is that would begin in June and that we would repay it over the next three years. The busses would be delivered around June 15-17, we’ll make a down payment from our rainy day fund of $2.2 million and then finance $1,967,305 over the next three years.”

Nunn anticipates bringing a similar proposal back before the school board before the 2017-18 school year, too, as another 35 busses will be hitting the 12-year mark and need replacing.