You are at:Home»Current in Carmel»Carmel Community»Firefighters memorial statue arrives in Hamilton County 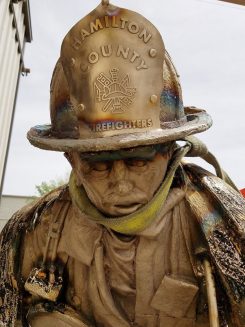 A close-up view of the detail of the statue before its final bronze cast. (Submitted photo)

It’s been nearly nine years since the idea for a fallen firefighters memorial for Hamilton Co. took hold, and two weeks ago, the completed statue made the cross-country trip home.

On May 2, family members of the three Hamilton Co. men who died in the line of duty got their chance to see the finished statue just outside of the Hamilton Co. Government and Judicial Center on the downtown Noblesville square.

The two had been married nearly seven years and had four children, the oldest of which was 6.

“I think it’s really nice that they’re memorializing those that have given up their life, because all firefighters, when they go out, you never know if they’re going to come home,” Sims said. “My husband was gung-ho for the fire department.”

Gwen Galbreath, who will be 92 in September, was the wife of Byron Galbreath, who died in 1951 at age 31, leaving behind his 26-year-old wife and three daughters, who were all 5 years old or younger, Joyce Kinnman, Janet Jaros (former Noblesville Clerk-Treasurer) and Jo Rhodes.

“He had gotten home from the war and got with the National Guard. He heard how bad the fire was and went down to help,” said Rhodes, who was 2 years old at the time. “He had been a firefighter before the war.”

To get the statue home at its Hamilton Co. headquarters was emotional. When the U-Haul truck – driven by Hamilton Co. Councilor Steve Schwartz and his wife Laurie who own Schwartz’s Bait and Tackle in downtown Noblesville – family members of the three men climbed into the truck one-by-one to see the piece up close.

Weighing in at approximately 2,000 pounds, Laurie Schwartz said the weeklong trip wasn’t always easy – as loading the statue into the truck took nearly two hours – but was definitely worth it.

Laurie said while they’ve always been supporters of public safety officers, a personal, life-saving experience by area firefighters after a serious car accident in 1985 involving Steve Schwartz and his father Glen caused the family to give back to public safety causes for the next three decades.

The Schwartz family, who also runs a U-Haul business out of the bait and tackle shop, donated the use of the U-Haul truck and their time to fly to Arizona, load the statue and drive it back to Noblesville, stopping at nine spots along the way to visit other fire departments.

Now that the statue is home, the entire memorial site will need to be developed before it will be on display to the public as a point along the City of Noblesville’s in-development Riverwalk. The memorial site will sit behind the government and judicial center on the east side of White River. The statue will remain in storage until the plaza is complete.

Also part of the memorial will be thee bronze helmet memorials for each fallen firefighter and, in a separate base, a piece of one of the World Trade Center towers from 9/11.

Local artist Rodney Reveal helped design the piece with artist Nicholas Wilson, who actually made the statue in Prescott, Ariz. at his foundry. The piece took two years to complete.

For more, or to donate to the memorial, visit hcfallenfirefightersmemorial.org.

Galbreath was electrocuted and died from his injuries while working at a fire in a junk yard at Sixth and Preston Streets in Noblesville.

Clark died from injuries suffered while responding with another firefighter aboard an apparatus. A civilian driver pulled his vehicle into the path of the apparatus, and when Clark swerved to avoid contact, he struck a tree. Both men were ejected, and the apparatus landed on top of them.

Moulder died from injuries suffered from a building collapse. He was working at the scene of a multi-alarm fire that consumed several buildings in the downtown business district of Noblesville, near Sixth and Conner Streets.