You are at:Home»Current in Carmel»Carmel Business Local»Beach Whiskey coming soon to Indiana 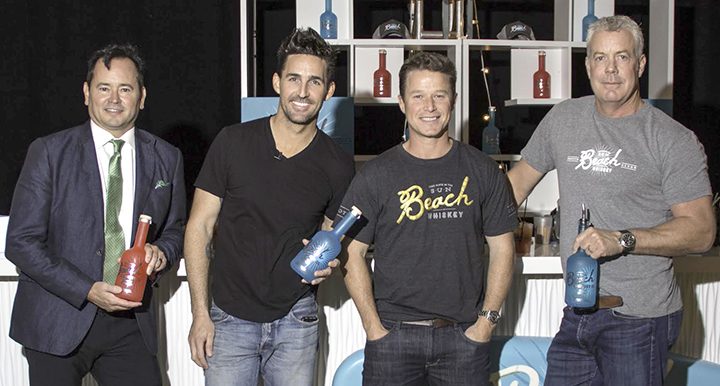 After spending time with some of his friends in Santa Monica, J. Smoke Wallin and his group noticed one thing. Vodka, rum and tequila flew off the shelves while the whiskey sat dusty, hot and not selling.

“The thought occurred to us, and my (business) partner, Andrew McGinnis, said, ‘Why not whiskey? Why isn’t whiskey selling out here at the beach and during the day?’” said Carmel’s Wallin, co-founder and CEO of Beach Whiskey. “The idea of day-drinkable whiskey was born. We decided to create a smooth, light, crisp, day-drinkable whiskey.”

Thus began discussing the idea in the fall of 2014, and the company was formed in March 2015.

“To bring a product like this to market, it takes about a year, year-and-a-half between getting the flavors and the liquid right and putting the bottles together. We wanted to put the whiskey in sea glass-looking bottles, and that was one of the hardest things to do,” Wallin said.

Beach Whiskey launched in Hawaii at the end of May, and will be available in California, Tennessee and Florida this month. Wallin said he expects the product to be available in Indiana next month.

Wallin said the main success behind Beach Whiskey was the marketing.

“One of our co-founders, Billy Bush, just joined the Today Show. We thought that he had a great platform and could help us get the word out,” Wallin said. The group then decided to target a young musical star that had a following of 20-somethings and fit the beach lifestyle.

“We decided (country musician) Jake Owen was the best possible thing,” Wallin added. “We went down to see Jake and drank whiskey with him and his dad, and he loved it.”

The whiskey is made in an old Seagram’s plant in Lawrenceburg, Ind., and bottled in Louisville, Ky.

“I think in all my years and companies I’ve started, I’ve had plenty of challenges along the way … It’s all about how you respond to the challenges and being able to overcome obstacles is, I think, the number one quality for someone to be successful,” Wallin said. “There’s nobody that you can meet that doesn’t run into problems along the way, and it’s all about how you respond to it.”