You are at:Home»Current in Zionsville»Back in the day: Panhandle pipe line still serves Zionsville 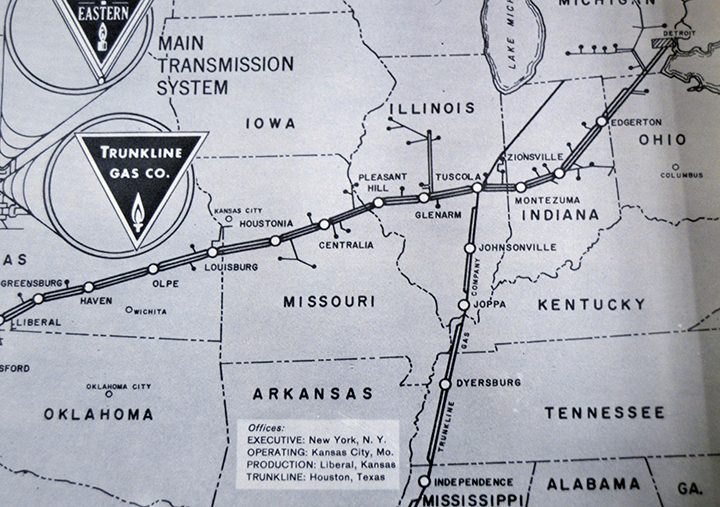 This graph, published in 1965, shows the pipe line’s route from Texas to Michigan. The starting point is centered where the gas is found in the mid-continental area, which encompasses Oklahoma, Kansas and Texas, and the Gulf Coast states of Louisiana and Texas. Primary offices in 1965 were in New York, N.Y; Kansas City, Mo.; Liberal, Kan.; and Houston, Texas. (Photo courtesy of Zionsville High School)

The Panhandle Eastern Pipe Line wound its way to Zionsville sometime in the 1930s. Throughout the ensuing years, the company has continued to supply natural gas to the area as well as other parts of the Midwest.

Originally incorporated in 1929 as Interstate Pipe Company, the entity started with 860 miles of line and planned to terminate at Minneapolis, Minn. Expansion happened quickly, however, to serve the more populated areas of the midwestern states.

At the time, Panhandle Eastern served 110 utility distributors in a market of 22 million people in 12 states. Net income was $40.6 million.

During its slowly evolving history, the company has grown and is now a subsidiary of Energy Transfer Partners. With 1,400 miles of pipes along the route, the company supplies such outlets around Zionsville as Citizens Energy Group, Dow Chemical USA, Indiana Gas, Lebanon Lateral, NIPSCO and Noblesville Plant-Duke Energy Indiana.