The Rotary Club of Carmel announced June 3 that John P. Schuler has been presented with the group’s 2016 Rotarian Outstanding Service Award. 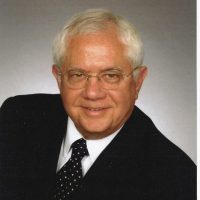 This distinguished annual award is bestowed upon a non-Rotarian who best demonstrates dedication to the enhancement of Carmel and Clay Township through community service and who has demonstrated the motto of “Service Above Self” in the community.

The recipient of the ROSA will be publically recognized during the community’s annual CarmelFest celebration by riding on the Rotary float during the CarmelFest parade.  The honoree is also presented with a permanent plaque at the Rotary Plaza on the Monon Trail.

“John’s numerous contributions to the community span several decades and include some of the communities most memorable events and critical tasks,” stated Judge Brian G. Poindexter. “John has served as the Board President of the Carmel Symphony and was the creator of the Concert in the Quarry held at the Martin Marietta Quarry on 96th Street and featured the Carmel Symphony Orchestra and the church choirs of Carmel.  He currently serves tirelessly on the board of Janus Developmental Services.  Janus provides adult individuals with disabilities the opportunity to participate and contribute within the community.”

Schuler continues to serve on OneZone Business Issues Committee and recently became a member of the Carmel Indiana Bond Bank.  Schuler is married to wife Patty.  They have raised two children and have three grandchildren and two great grandchildren.  Most Sundays Schuler can be found singing at either St. John the Evangelists Catholic Church in Naples, Fla. or Holy Spirit of Geist Catholic Church.