You are at:Home»Current in Zionsville»More restaurants, other retailers coming to the Villages at Anson 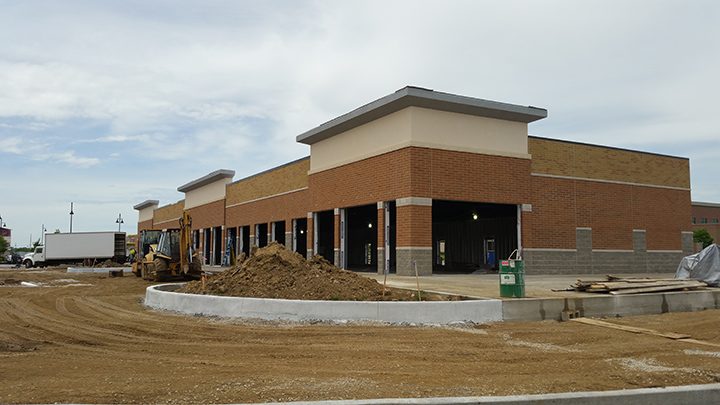 The third of four buildings in the Villages at Anson will soon be home to five new businesses. Dunkin Donuts, Flamme Burger, Sprint, Classic Cleaners and Xcel-Fit Club have all announced they will be tenants in the Whitestown development.

“It’s huge, because this is continued retail and restaurant investment into the county,” said Whitestown Town Manager Dax Norton. “The assessed value is what we want, because that is how we pay for services, how we tax. It shows a very healthy economy and shows our growth and makes it less risky to make an investment here, so I think that is why you are seeing a lot of investment.”

Norton said he can only speculate on why the five businesses decided to locate in The Villages.

“I think that some of them may have talked to their counterparts in (buildings) one and two,” he said. “Which Wich and Pie Five are doing well. Eighty-five percent of restaurants fail within the first year, research shows, but we were told by someone that Which Wich had the highest sales in their first month here than any other store in the chain in the country. Some of that may have been contributed to the grand opening, but that is excellent news.”

It has also been a good marketing tool for attracting new residents, he said.

“One of those items on the list of amenities you want is a diverse food base, if you will. Meijer helps as a grocery, too, because we aren’t in a food desert,” Norton said. “So, of course it helps. It is a people attractor, and you need people in turn to attract higher-end industry and higher-end jobs, which are going where people are and not waiting for people to go to them anymore. On the heels being named the fastest growing community the fifth year in row this is a byproduct, so it just proves a point.”

Construction on building three in The Villages began in January and is expected to be complete by the third quarter of 2016. Seven businesses and restaurants currently are tenants in the first two buildings in the development.