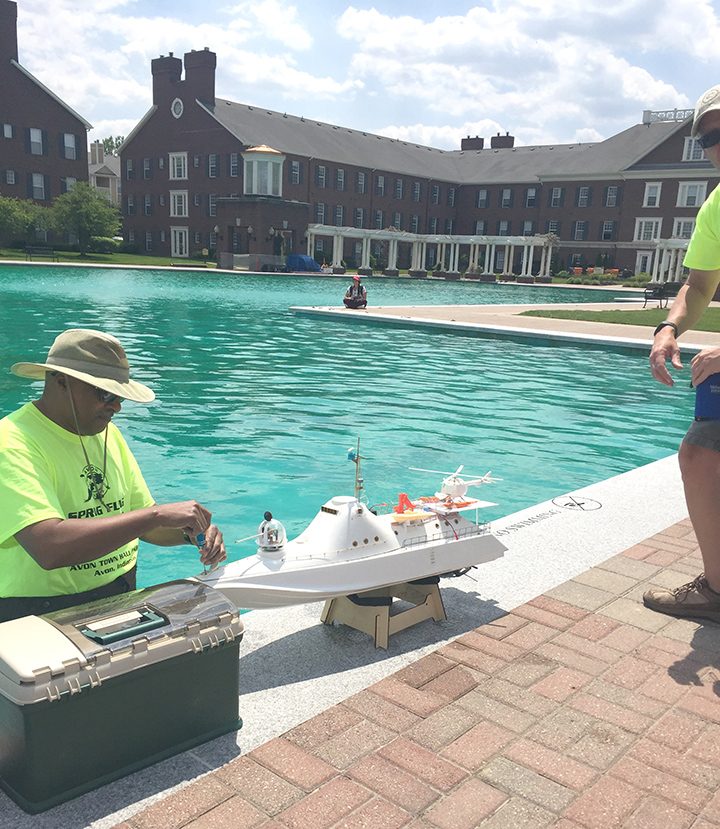 David Hampton works on a boat as he stands in the Veteran’s Memorial Reflecting Pool. (Photo by Adam Aasen)

A passionate group of model boat hobbyists are excited about a full, warm-weather season of running their scale ships in the Veteran’s Memorial Reflecting Pool in Carmel.

Last year, the City of Carmel repaired the damaged concrete of the pool, which is across the street from The Palladium, and reopened it for use just before July 4.

After settling a lawsuit and having extra money, the Carmel Redevelopment Commission decided in January 2015 to spend $460,500 for a contract with the Smock Fansler Corporation to fix the war memorial that was constructed in 2003. The original contractor went out of business, and the city was unable to sue for what it says was faulty construction.

John Lauk, communications director for The Admirals of Indianapolis, said he and his fellow club members are ecstatic about the pool being fixed.

“This is the best venue in the United States, believe it or not,” he said. “This is by far the best scale venue that you could dream up.”

The group has 75 members, he said. Some people buy boats that are already built, and others build theirs from scratch, using hobby stores to find anything they need. Some models are exactly to scale and modeled precisely after real-life boats, ships and submarines. Lauk, a retired lieutenant commander in the Navy, said he’s built swift boat models exactly like the vessels he was on during the Vietnam War.

“It’s relaxing,” he said. “We find just as much fun in building the models as running them.”

Lauk said Carmel’s reflecting pool is the perfect venue because it’s protected from weather and the depth is almost uniformly 28 inches all around, which means it is easy for members to wade out into the water to retrieve a ship or submarine that is stalled or submerged. The group also sometimes uses a venue at Grand Park in Westfield for sailboat events and the Carmel High School natatorium during winter months.

The reflecting pool’s reputation is spreading. A big regional event is coming to the venue Aug. 6 and 7 that will attract scale model boat, ship and submarine enthusiasts from many states. More details can be found at www.indyadmirals.org.

For interested attendees that have never operated a model boat or ship, there are club boats available most Sundays at the pool. Anyone can stop by, grab a remote control and learn how to speed through the water.

“It’s a great hobby,” Lauk said. “Unlike a full-size boat, you don’t have to spend a lot of money.”

The Admirals of Indianapolis will meet at 6:30 p.m. June 9 at the Clay Township Government Center, 10701 College Ave., Indianapolis. The club also has an event planned at Grand Park in Westfield at 10:30 a.m. June 11. An Admiral’s Picnic is scheduled for June 26 at the Veteran’s Memorial Pool in Carmel.