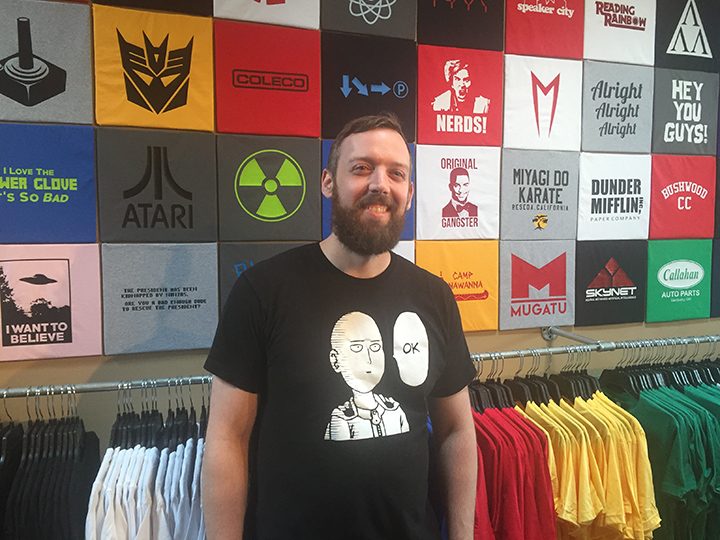 Tyler Copas in his new shop. (Photo by Adam Aasen)

Tyler Copas wants to make it easy for anyone to get what they want on a T-shirt, fast and inexpensive.

Often when someone wants to make a custom T-shirt for an event – a birthday, a bachelorette party, a family reunion, a running race or more – they find out they have to buy a minimum number of shirts, Copas said. Usually it’s 15 or 20 shirts, and printing just one custom shirt can be costly. Plus he said people often have to put in their orders in advance or wait for their custom T-shirts to ship in the mail.

But Copas said his business, Your Tees, at 25 W. Main St. in the Carmel Arts & Design District, is different.

“Here, you can get just one shirt, and I can get it to you in fifteen minutes,” he said.

Copas will design your shirt on his computer in the back and then print it on the fabric using a special, vinyl-cut printer. He charges a flat rate of $19.95, if customers use a shirt from Your Tees, and $14.95 if customers bring their own shirt. Shoppers can pick out designs already on display or a custom design for no extra charge. Screen printing shops use a much longer process to create T-shirts.

Copas opened Your Tees in the space formerly occupied by The Foolery, a comic book and vinyl record store.

“I decided to open my own shop and see if I could be my own boss,” he said. “(I kind of) got tired of working for other people.”

Copas, 31, graduated from Ivy Tech in 2005 and started to look for jobs to use his graphic design training. He responded to an ad in the newspaper and that led him to designing T-shirts for sale for the past 10 years.

“For a place like this you need a lot of foot traffic,” he said. “We see people walking around even around 9 p.m., so it works. It’s the arts district, so it’s a great fit.”

On display in the store are a variety of nostalgic and humorous T-shirt sayings. There are movie and TV-show references that fall under parody fair-use laws, such as references to “Zoolander,” “Tommy Boy,” “The Office” and “Transformers.” For the Indianapolis 500, Copas created a special shirt that read, “Left turn & left turn & left turn and left turn.”

Copas said there are only a few exceptions for what he will put on a T-shirt. His flat fee doesn’t include creating a special logo for a business or nonprofit that they would then use in other forms. He also won’t infringe on copyright laws. For example, he won’t make an Indianapolis Colts shirt for someone. When it comes to printing something offensive on a T-shirt, Copas laughed because it’s never come up before. He said nobody has ever asked him to print something on a shirt that made him uncomfortable.

“We’ll print anything you want and make it yours,” he said. “I love to create something personal for our customers, and maybe it’ll be cool if we walk around and see someone wearing a shirt we designed.”