You are at:Home»Current in Zionsville»Boone Meadow poet honors American flag 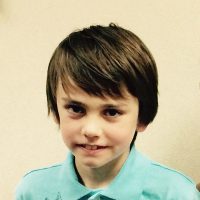 Luca Ranalli’s first foray into poetry has made quite an impression.

“It was a class assignment to write any kind of poem,” said Luca, who just finished second grade at Boone Meadow Elementary. “I don’t know why I chose the American flag. It just came into my mind.”

“But this kid is an extremely patriotic kid,” she said. “He’s a kid who will notice a veteran’s hat or a veteran in uniform and be the first kid to stick out his hand and say, ‘Thank you for your service.’ When it was hero day, he wore camo, and we made a yellow ribbon and said, ‘I support our troops.’ The American flag did just come to him, but it came to him because his heart is very much into America.”

Luca’s grandfather, Chuck Ranalli, was a Marine captain in the Vietnam War.

Luca, who turns 9 July 8, said he enjoyed writing the poem. The family is seeing if Highlights, the children’s magazine, is interested in publishing his poem. He also submitted to a poetry contest for children.

His mother never saw the poem until after Luca turned it in and it was put in folder with other students’ poems. Luca said he wanted to keep it a surprise.

“He’s doesn’t like to draw a lot of attention to himself,” Jennifer said. “He’s very modest.”

As soon as she read it, she was impressed with the maturity of it and the depth of it.

“I talked to his teacher and said, ’Is it just me, or do you think this is good?’ She said, ‘I think it’s phenomenal. We should enter it some kind of contest.’”

His teacher, Jennifer Bender, said Luca worked on the poem by himself for most of the session.

“We talked about using strong words in poetry,” Bender said. “Our big theme was taking something that seemed ordinary and using your words to make it extraordinary.”

He salutes the American Flag.

The 13 stripes as long as a blue whale.

As silky as the softest blanket.

Showing us the song of liberties beat.

He helps us remember