You are at:Home»Current in Carmel»Carmel Community»Back in the Day: Carmel’s first mayor oversaw population growth 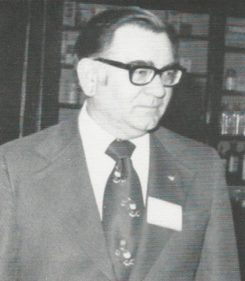 Albert Pickett served as Carmel’s first mayor. (Photo courtesy of the office of the Mayor of Carmel)

In 1874, Carmel was incorporated as a town and remained that way for 100 years. In 1974, residents voted to make Carmel a fourth class city. Elected as the city’s first mayor in 1975 was Albert Pickett.

A 1936 graduate of Carmel High School, Pickett brought nearly a lifetime association with the city. Except for 10 years of his life, the 37 year old had lived in Carmel. He left town to work as an engineer in the aerospace industry. When he returned, he handled an assortment of duties in various town departments. At the time of his election as mayor, he was living in the house where he was born.

In 1975, the city’s population was about 13,500. The residential growth rate was to skyrocket. According to the Polis Center, the Carmel-Clay area was the fastest growing community in Indiana from 1970 to 1980. The town board annexed properties on 21 occasions, sometimes ruling on several properties at one time. These annexations were nearly all devoted to residential developments.

This tremendous growth brought a slew of new issues to Carmel. One of particular concern to Pickett was in how to meet Carmel’s future water needs. As the city grew, the demand on public access to water also increased.

“Over the next four years,” according to the Polis Center, “Mayor Pickett and the new city council addressed all of these needs, demonstrating that they were attempting to stay ahead of the anticipated phenomenal growth.”  By 1980, the population had grown to 18,272 – a 178 percent increase during the decade.