You are at:Home»Current in Carmel»Carmel Community»Google Trekker captures views of Carmel trails, parks 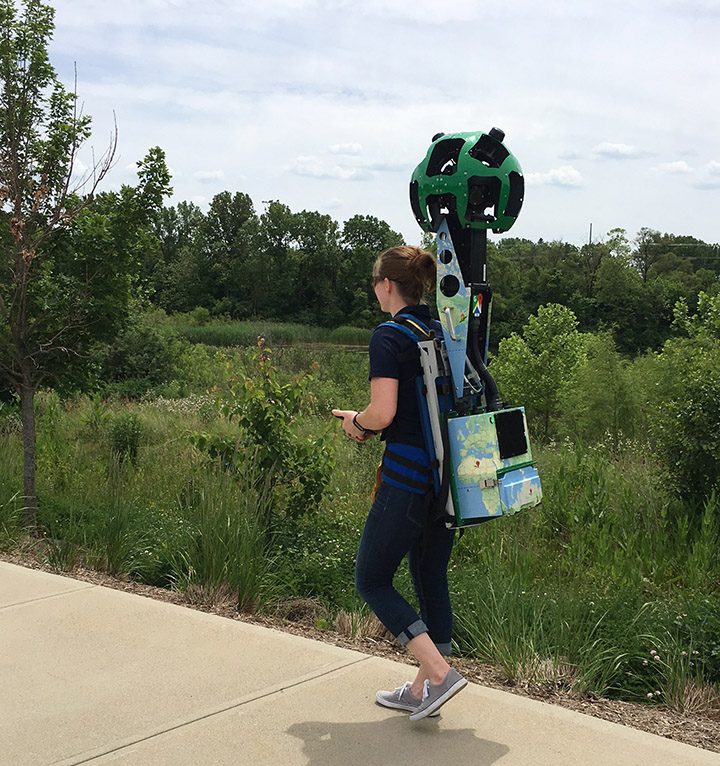 Several Carmel parks and trails will soon be accessible without ever stepping foot in them.

Carmel Clay Parks & Recreation has partnered with the Indiana Parks and Recreation Association to use a Google Trekker, a 50-pound camera in a backpack, to capture the view along trails and in parks. The Trekker has 15 lenses that take photos in rapid succession that can be stitched together to create a 360-degree view of an area.

“Google Trekker allows Carmel Clay Parks & Recreation the opportunity to capture 360 visuals of their trails, a place where Google StreetView isn’t accessible,” CCPR Marketing Director Lindsay Labas said. “[CCPR] will be able to more effectively promote their parks and greenways by providing visuals to the public before they show up.”

Weather permitting, CCPR plans to use the Trekker in all Carmel parks with a trail network, including West Park, Founders Park, Central Park, Lawrence W. Inlow Park, the Monon Greenway and others. Images are expected to be online in six to 12 months.

“Google takes care to ensure that faces or personal information are not displayed in the images captured,” IPRA Executive Director Lisa Nye said.

The Trekker will be in Indiana parks through July. IPRA reached out to its members to determine which communities would be interested in using the technology to create a travel schedule for the Trekker. In addition to parks and trails, it is expected to capture views at golf courses, gardens, nature preserves and waterways.

IPRA is the first parks and recreation association to use the Trekker, Labas said.

Last year, CCPR partnered with Google to create a virtual tour of the Monon Community Center to showcase its amenities to those interested in getting a membership.