You are at:Home»Current in Carmel»Carmel Community»Kite Realty seeks to transform 116th and Range Line 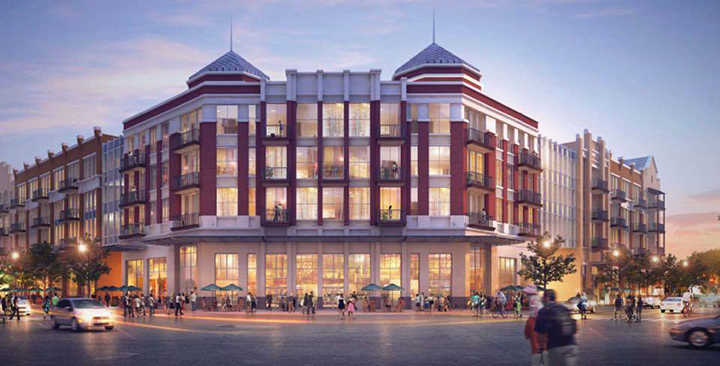 Kite Realty is looking to transform the southwest corner of 116th Street and Range Line Road from a struggling strip mall to a brand new mixed-use development with more than 200 new residential units.

The shopping center, called “The Corner,” currently has tenants that include MacKenzie River Pizza, BMO Harris Bank, In Vogue consignment shop, Kimmel Shoe Repair and Smart Stop Cleaners. The shopping center has had its struggles with some vacant storefronts and only 43 percent of the available 42,500 square feet of space is occupied.

In February, CEO John Kite revealed the company’s plans to de-lease and empty out the existing center. The new construction would cost between $15 million to $20 million. The new construction is planned to be a 30,000 square-foot mixed-use development with commercial and retail on the first floor and 250 to 275 units on upper floors.

A similar development was considered when Kite transformed The Centre in 2012, an adjacent property on the northwest corner of 116th and Range Line. That project includes a two-story Walgreens that relocated from north on Range Line Road, a Panera Bread, City Barbeque, Foot Finesse, Piada and others. The addition of Earth Fare, a high-end grocery store with organic goods, made it difficult to go the route of mixed-use development in that spot, according to sources within Carmel city planning.

For The Centre, Kite had to follow the city’s height guidelines for Range Line in some spaces, which led to two story structures for Walgreens and Verizon Wireless. There’s no tenant above Walgreens, but there are tenants above Verizon, including yoga studio Mind Body & Core. The Carmel City Council recently renewed those height requirements and City Councilor Bruce Kimball said a multi-story building directly across from Walgreens will help with the feel of the area.

“This is going to make everything look like it fits together and really make it a beautiful intersection,” he said. “We have found that strip centers really have a shorter life use than a mixed-use development. This will be a positive asset for the community.”

Kimball posted photos of the proposed development on Facebook and received some comments from Carmel residents who questioned whether the city needs more apartments and condominiums. He said he held a meeting with the residents of the adjacent Creek Side neighborhood and they seemed to be excited about having a thriving retail area within walking distance. He said this is what Carmel needs to attract young workers.

“I think when we look at suburbs like Carmel and Westfield and Fishers, we don’t have a great number of apartments compared to our population,” he said. “This is our affordable housing.”

The Corner has 59,187 people living within three miles, according to 2015 figures.

The proposal hasn’t made its way to the Carmel Plan Commission yet but the plans were part of a filing with the Securities and Exchange Commission.

These changes to the 116th Street and Range Line Road intersection could coincide with other proposed changes to the area. A roundabout is in the city’s plans for 116th and Range Line Road, which is listed for spring 2017 construction, according to the City of Carmel. That roundabout could be finished in 2018. Carmel Mayor Jim Brainard has also discussed his plans to possibly eliminate the middle lane of Range Line Road in favor of a landscaped median or even some sort of bicycle lane or multi-use path. Those talks are still in the evaluation phase as the city meets with consultants.