You are at:Home»Current in Zionsville»Zionsville teen named Indy Leukemia & Lymphoma Society Woman of the Year

As a Leukemia & Lymphoma Society Indiana Chapter Indianapolis Women of the Year candidate, Abigail Boldt seemed like a perfect fit. 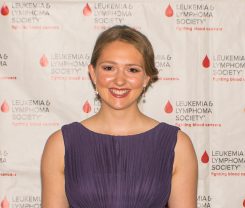 She’s young, intelligent, personable and energetic. Oh, yes, and she is a cancer survivor as well.

“I had no idea I was ever going to raise this much,” Boldt said. “I think it’s completely great that I was able to do so and be able to fund so much great research. It will really help other kids and even adults have a great future.”

This year a record-breaking $1.1 million was raised in the 10-week campaign.

In 2013, Boldt, 17, learned she had acute lymphoblastic leukemia and underwent intensive chemotherapy for eight months. She completed her last treatment in January 2016. She was just seven weeks into her freshman year at Park Tudor High School when she was diagnosed.

“I missed so much school that I had to repeat my freshman year,” said Boldt, who decided to attend Brebeuf Jesuit when she returned to school in August 2014.

Her mother, Monica, said Abigail is considered cancer-free since her last treatment in January.

Boldt was asked to run by 2014 Indianapolis Man of the Year winner, Dr. Matt Priddy, one of her family physicians.  Boldt and Women of the Year runner-up Alissa Moody broke Priddy’s campaign record total of $187,000. Moody raised more than $201,0000.

She accepted the nomination in early November and started asking people to be on her team in December. The team was mostly adults, except for Carmel High School student Erica Zirkelbach.

“I tried to have people from different professions and all different walks of life,” said Boldt, who competes in equestrian shows.

Boldt held fundraisers and her team members reached out to their connections to get donations.

“A lot of our family friends and Abigail’s friends were very generous,” Monica said.