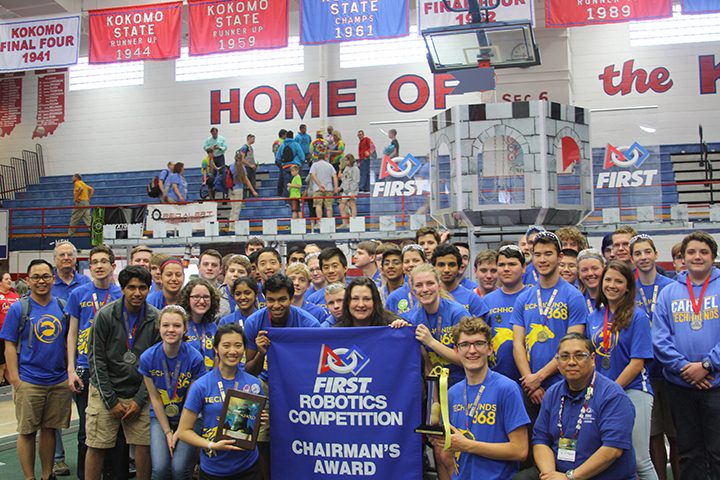 For senior Vikas Maturi, the Carmel High School TechHOUNDS season was a memorable one.

The robotics team competed in the FIRST International Championship April 27 to 30 in St. Louis, which featured 600 teams.

“Our team performed incredibly well at the FIRST Championship,” said Maturi, the student team lead. “While given a tough schedule, we ended up ranking second in offensive power in our division (of eight divisions),” Maturi said. “However, due to some questionable calls, we unfortunately lost in the quarterfinals of our division and did not advance.”

Earlier in April, the TechHOUNDS competed at the IndianaFIRST State Championship in Kokomo.

The team, which finished third overall in the qualifying portion, won its quarterfinal and semifinal matches, advancing to the state finals. Maturi said the team lost in two matches to the opposing alliance and winners, finishing as one of three finalists.

The TechHOUNDS were selected to receive the Indiana District Championship Chairman’s Award. Maturi said the award is the most prestigious award in FIRST and recognizes the one team in Indiana that has had the greatest impact in inspiring technology leaders.

“Having never won this award before, we were beyond ecstatic to be recognized for all of our community outreach,” Maturi said. “It is truly an incredibly honor.”

Prior to the state competition, the TechHOUNDS won the Warren District Event and Queen City Regional in Cincinnati. The regional title qualified them for the FIRST international competition.

“I would attribute the success of our team to our size,” said Kate Hawkins, a member of the electrical division. “We have 114 members, which allows us to get a wide range of perspectives when it comes to how our team functions as well as robot design. Our members also have a lot of team spirit. Everyone who goes to our competitions always cheers on our drive team and robot when we are competing.”