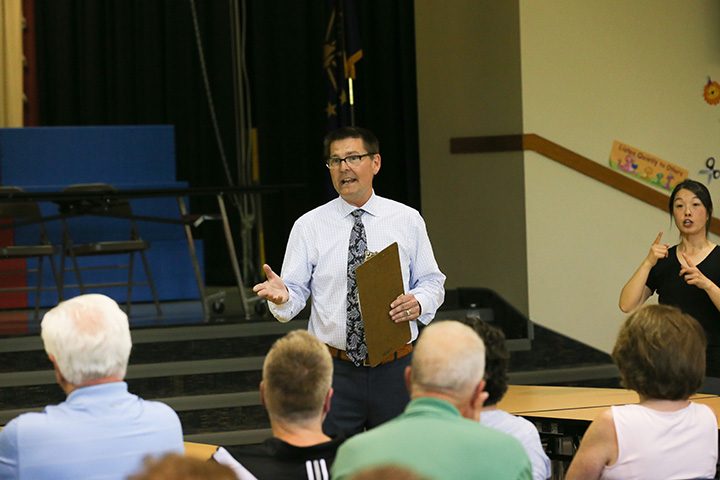 City officials unveiled upgrades planned for 96th street as they answered questions from residents of southeast Carmel on May 11 at a community meeting.

The road, which is Carmel’s southern boundary, is planned to have several of its intersections converted into roundabouts, and Mayor Jim Brainard said that long-term plans include extending it west of Westfield Boulevard, where it currently comes to an end. Brainard said these changes should help traffic flow along 96th Street and lessen congestion on 116th Street, the only major thoroughfare to travel east to west through the entire city south of 146th Street.

Of the planned roundabouts along 96th Street, the interchange with Keystone Parkway is the largest and expected to cause the most disruption, both for motorists and nearby businesses.

“It’s not going to be pretty during construction,” Brainard said. “It’s going to be a mess.”

To minimize disruptions, the city plans to complete the transformation in one construction season, with the project being bid out in early 2017 or sooner and wrapping up by the end of the year.

Brainard said that disruption to businesses in the area is unavoidable, but in the long run, it should benefit them. He believes the current congestion at the intersection has already led to the closure of nearby businesses that were difficult to access.

“(Without the project) in the long run people are going to start totally avoiding that intersection, and we’ll have a huge desert of empty abandoned buildings if we don’t do something,” Brainard said. “That’s my larger fear because that’s not good for the community.”

Unlike the other roundabout interchanges along Keystone Parkway, the planned design is for 96th street to remain at level with Keystone traffic flowing over a bridge. Brainard said the number of underground utilities along 96th Street will not allow the road to be raised above Keystone Parkway.

Many of the upgrades are funded through $242 million in new bonds approved by the City Council in January. Brainard said the city closed on the bonds May 5, which will allow for contractors to begin being hired for the projects. He also said that the Carmel’s high bond rating saved the city about $1 million in what officials expected to pay, which will allow for additional work to be done.

At the meeting officials also addressed concerns from residents about plans to rezone Plum Creek Golf Club for a residential development. They said any private developer is welcome to petition the city for a zoning change, but as of May 11, the petitioner had not filed anything.

“This is the strangest development project I have ever encountered in all my years on council. You just don’t put something out in the public domain like that and show it before you bring it to the council,” he said. “It’s so strange and has so many obstacles that this is probably going to be DOA.”