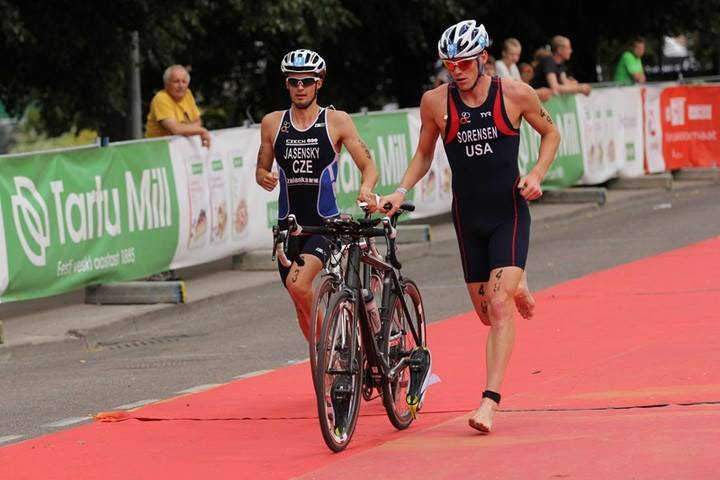 Dylan Sorensen, right, competes in a triathlon at the Estonia European Cup in July 2015. (Submitted photo)

That changed during his final track and field season at Georgetown University in 2014 when he was approached by 2004 Olympic triathlete Barb Lindquist from USA Triathlon.

“The way the Olympic format is set up, the runners win the races,” said Sorensen, a two-time All-American in the 3,000-meter steeplechase at Georgetown. “She recruits college runners and swimmers but primarily runners she thinks might have had some swimming experience and a cycling background. I did neither of those things. She contacted me because my coach referred me to her. I’ve always been bigger as a runner at 6-2 and 170, much bigger than your average distance runner. I played basketball until high school was over. I was more athletic than your typical distance runner who is uncoordinated. She thought I could be good, and she made me believe I can be good, too.”

Sorensen, who also competed in cross country at Georgetown, is now competing for a spot on USA Olympic Triathlon team. He completed his first triathlon in July 2014 and then attended a camp at the Olympic Training Center in Colorado Springs, Colo., later that summer.

“I’ve been making massive improvements in my swimming,” said Sorensen, adding the cycling adjustment was easier.

Sorensen said he has been training approximately 16 months with the USA group, based in Scottsdale, Ariz. Three men and three women make up the U.S. Triathlon team. The men’s Olympic Trials are held May 15 (Sorensen’s 26th birthday) during a triathlon in Japan. If an American gets in the top three at that triathlon, he or she automatically qualifies for the Olympics in Rio.

“At this point, for me, it will be really difficult for me to qualify,” he said. “However, it’s not impossible. I have to nail my races for the next (several weeks). Only the top six Americans make that race (in Japan). The Olympic points period is two years long. I’m way behind in the points because I’ve only been in it about a year. Unless I get in that race and get on the podium, I won’t be in the race. The good thing is I’m one of the best runners in the world for triathlon. If I’m able to get in the race, have a good swim and am able to get in a good spot coming off the bike, there’s no reason I shouldn’t be racing for a spot on the podium.”

Sorensen said he and some others were actually brought into the group for the 2020 Olympics in Tokyo.

“So they had a longer-term plan, but they said if everything goes well, they would love to have us go sooner,” Sorensen said.