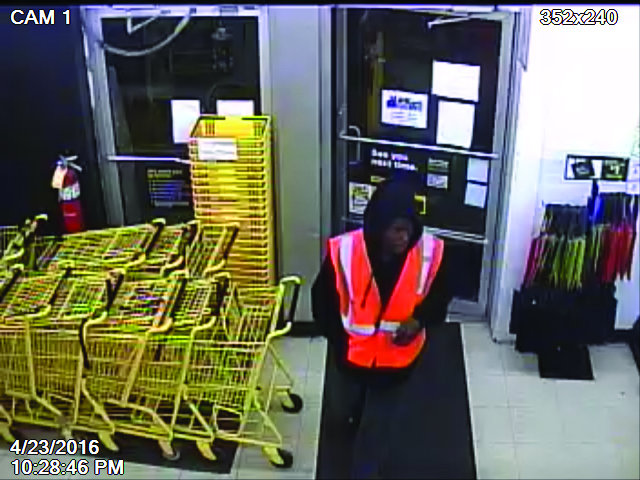 Lawrence police are trying to determine the identity of this pictured suspect who robbed the Dollar General at 8050 Pendleton Pike. (Submitted photo)

The City of Lawrence Police Dept. is seeking the public’s assistance in identifying the suspect from an April 23 robbery of the Dollar General store located at 8050 Pendleton Pike in Lawrence.

Just before 10:30 p.m. that night after the manager had closed the store and was leaving with a co-worker, the manager was approached by a male suspect armed with a handgun. The suspect directed the manager back into the store, where he demanded money. The suspect walked away from the store to the west after receiving cash, but responding officers were not able to locate him.

The suspect is described as a male wearing a black sweatshirt under an orange safety vest and blue jeans.

Anyone with information regarding the robbery or suspect’s identity is encouraged to contact the Lawrence Police Dept. or Crime Stoppers of Central Indiana, where tips can be shared anonymously and may be eligible for a cash reward. Tips can be submitted by calling 317-262-TIPS or 800-222-TIPS, online at CrimeTips.org or through the P3tips Apple and Android mobile app.