You are at:Home»Current in Fishers»Fishers High School musical ‘Catch Me If You Can’ opens May 12 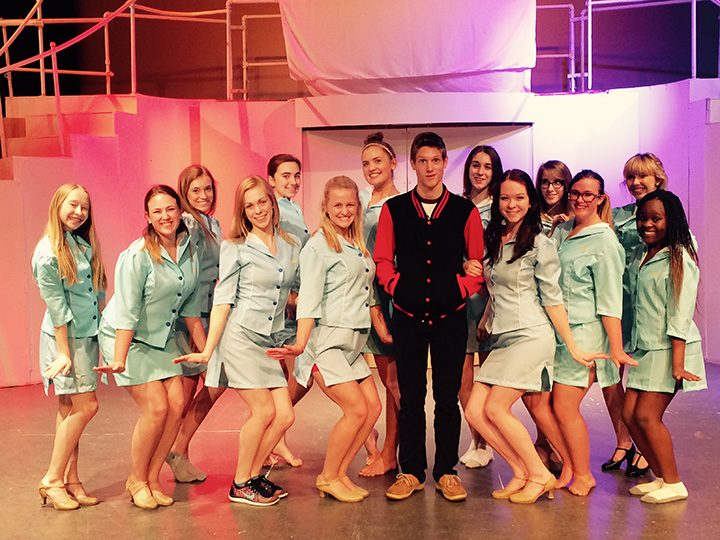 Conner O’Leary, surrounded by fellow FHS performers portraying airline stewardesses, plays the lead role of Frank Abagnale in the school’s production of “Catch Me If You Can.” (Photo by Mark Ambrogi)

Fishers High School junior Connor O’Leary did his homework when it was announced “Catch Me If You Can” would be the spring musical.

“I went home, listened to the soundtrack, watched the movie,” O’Leary said. “I got real familiar so when auditions came, I already knew the words to every single song just because it’s such a good musical.”

His research has paid off as O’Leary captured the lead role of Frank Abagnale. Abagnale is a former con man and check forger who has since long been a security consultant. The show will be at the high school auditorium at 7 p.m. May 12-14.

“I like the role because it’s so unique,” O’Leary said. “In shows that I’ve played in the past, I’ve been characters who are more comic relief or characters that are abstract. But this character is so believable because it is a true story after all. It’s really fun to play.”

“There is a ton and ton of singing,” O’Leary said. “I’m on the stage for almost every single scene. It’s kind of frustrating because I feel reluctant to complain how much work I have to put into it because, of course, I’m the lead and everyone is saying you must be having so much fun — and I am, but it is a lot of work.”

O’Leary has not seen the musical because he said he knew subconsciously he would steal things the lead performer on Broadway has done.

O’Leary is also in concert choir and on the speech team at FHS. As a sophomore, he played LeFou in the high school’s production of “Beauty and the Beast.”

“He’s socially awkward,” Foy said of the character. “It’s hard to play the role of not being interested in what is going on around me but being hyper-focused on catching Frank.”

FHS Performing Arts Dept. Chair Matt Rund, who is directing the musical, said his performers enjoy the setup, which is similar a TV variety show.

Tickets are $5 for students and $7 for adults.