You are at:Home»Current in Zionsville»Zionsville Plan Commission shares concerns on 200 West 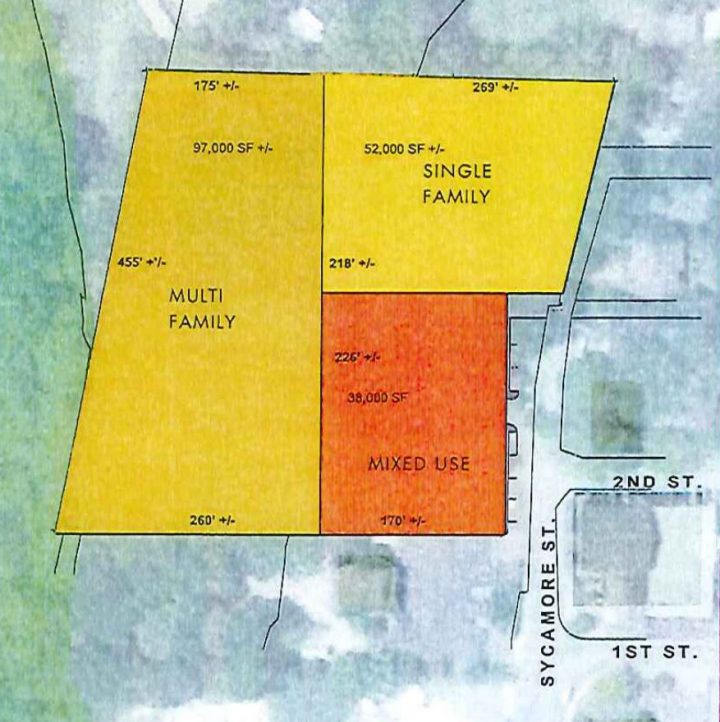 In its fourth appearance before the Zionsville Plan Commission, the 200 West project was granted another continuance during a special meeting May 4. The proposed 200 West project, which aims to rezone approximately four acres of land at Second and Sycamore streets for a mixed-use planned unit development with single-family, multi-family and commercial uses, will be brought before the June 20 plan commission meeting.

The special meeting, which brought out dozens of concerned residents, included a public hearing that lasted approximately three hours. Several members of the public voiced their opposition during the meeting, citing concerns about building size, flooding and drainage, traffic and overall architectural impact on the Village district.

Members of the plan commission shared their own concerns with the proposed PUD.

Since the area in question is partially in a tax increment finance district, commissioner Kevin Schiferl expressed concerns as to whether residential development would be appropriate for the area.

“What a TIF district actually does is it keeps that money in the TIF district and doesn’t give it to the schools for a 20 to 25 year period,” Schiferl said. “So, in fact, putting residential development in a TIF district is probably one of the worst tax things that we could do as a community that values their schools.”

Plan commission vice president Jay Parks stated that the language of the PUD as presented was too vague and that the building height would not fit in with the surrounding architecture.

“I do have concerns about the PUD as written, because it is much too broad and provides too much leeway for further changes down the path,” Parks said.

Resonating with remonstrators on the flooding concern, commissioner Larry Jones stated the PUD as presented did not seem plausible.

“With this site in the floodway and the flood zone, I’m not quite sure how you’re actually going to get the one-for-one trade for constructing an in-filling on the site with the large amount of building footprint,” Jones said. “From root plan to provided drawings to the calculations we keep seeing, it just doesn’t line up.”

“I think there is some language that could still be tightened down,” Franz said. “It’s clear, though, that something eventually is going to move out there. The question is what is the best fit and what is the best use.”

Tim Ochs, an attorney represnting the 200 West project, responded by saying the petitioners are open to further negotiation to address commissioners’ comments on altering the PUD.

“This is a significant project for the town of Zionsville and it is going to be there for a very long time,” Ochs said. “We’ve heard concerns from a number of commission members about tightening up the PUD. Certainly we would sit down, roll up our sleeves and continue to work with the town and staff to try and tighten this up.”