You are at:Home»Current in Zionsville»Whitestown fire dog dies after battle with cancer 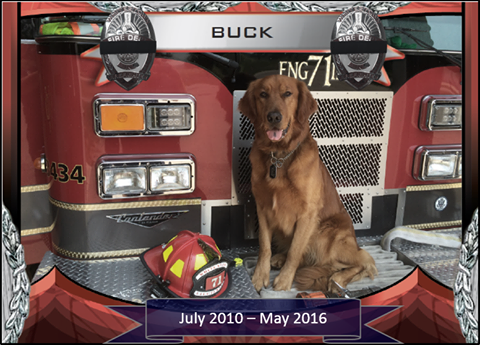 Buck passed away after a month-long battle with cancer. (Submitted photo)

He was a familiar site around Whitestown Fire Dept. Station 72 – a playful Golden Retriever named Buck with a very important job sniffing out accelerants at fires suspected of being intentionally set.

But on May 2, Buck, who was just 5-years-old, passed away after a month-long battle with terminal cancer.

“When I went to take him to the vet, both (fire) stations here in Whitestown were there. All the crews lined up as I took him inside,” Buck’s handler and owner Lt. Brandi Cunningham said. “The room was big enough that there were about 12 of us in there. I was surprised but they said they were going to stay right there with me. I didn’t look up because I was crying, but I was told there wasn’t a dry eye in the room.”

Cunningham got Buck in December 2012 when he was 2 ½ years old from Bob Laughner, who trains police dogs. Laughner had started working with Buck, who was a family pet, just to see what he could do.

“He pretty much offered him to me for free to try out as an accelerant dog,” Cunningham said.

Certified on 12 different accelerants, Buck was one of just four accelerant sniffing canines in Central Indiana.

“We would handle a handful of calls in Boone County but the State Fire Marshall would call me a lot and I would take him wherever he was needed throughout the state,” Cunningham said.

Buck was a fixture at the station when Cunningham was at work. That’s a rare thing in this day and age, according to Whitestown Fire Chief Josh Westrich.

“A lot of people went away from having a firehouse dog. Most weren’t training in anything – just a department mascot if you will,” Westrich said. “Because of the three shifts – the different families if you will – the dogs got different treatment on various shifts – say one would allow the dog to eat table scraps, and another wouldn’t. Plus, not everyone is keen on having a dog around.”

That wasn’t the case, however with Buck.

“They were very flexible to let me bring him to work. He was such an extremely friendly dog and everyone had their own special bond with him. The guys on my shift were around him a third of their lives. They would play fetch with him, kids would come to the station just to see Buck,” Cunningham said. “Maintenance is also out here so maintenance guys or cops would stop by and come in the door and just yell for Buck to come see them.”

But make no mistake, Buck was a “Mama’s boy,” Westrich said.

“Even at work he didn’t like getting too far away from her,” he said.

“When I took a shower he would be right there in the locker room with me or if someone was petting him he would look over his shoulder to make sure I hadn’t left,” Cunningham said. “But he also knew when we got a run and the tones went off and he would usually be in the locker room waiting for me to close the door when I left.”

As to how she’s doing without her constant companion, Cunningham said overall she is “pretty good.”

“It’s just weird because in the middle of the night when I got up at work I automatically looked to make sure I didn’t step on him because he slept next to my bed and I’ve caught myself like ‘Oh, he’s not there,’” she said. “And, when we got to work the first thing he did was grab the newspaper and bring it inside for us.”

Right now Cunningham isn’t sure if she will look into acquiring another accelerant detection dog.

“I would have to talk to the chief to see if he would allow it but I am just not sure because honestly it is a lot of work,” Cunningham said. “The IMPD (Indianapolis Metropolitan Police Department) guys are bugging me about getting another dog because there aren’t enough of us but right now I haven’t really given it much thought.”