You are at:Home»Current in Carmel»Carmel Community»Russian Festival set for May 22 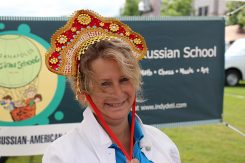 “Last year we had 1,500 people,” said Rekhter, who coordinates the event. “We expected maybe 400 or 500. We ran out of food to sell, items to sell. Everything was sold in three or four hours.”

Festival admission is free. There will be Russian food, including borsht and pelmeni (Russian style dumplings), Russian-style desserts and pastries, and crafts for sale. Rekhter said all festival proceeds will be used to benefit the school’s programs and activities.

“There is a lot of music and dancing,” Rekhter said. “It’s very festive.”

Craft items that sold out fast last year were the Russian-style nested dolls.

The entertainment will include St. Nicholas Balalaika Ensemble from Ohio; the Indiana Ballet Conservatory; Ballet Theatre of Indiana and Russian Folk Choir.

The folk dance group Kabluchok, from Cincinnati, will perform Russian, Ukrainian, Kozaks, and other dances.

There will be performance by students from Rhythmic Gymnastics of Indiana, led by Julia Workman. There will piano recitals of Russian composers’ music, along with songs, dances, and instrumental performances by the students of the Russian School of Indiana.

“We’re going to have lots of workshops, and chess and checkers,” Rekhter said. “There will be a bounce house for the kids. We’re having a documentary of Russia.”