You are at:Home»Current in Carmel»Carmel Community»Carmel Mayor Jim Brainard urges Republicans to unite behind Trump 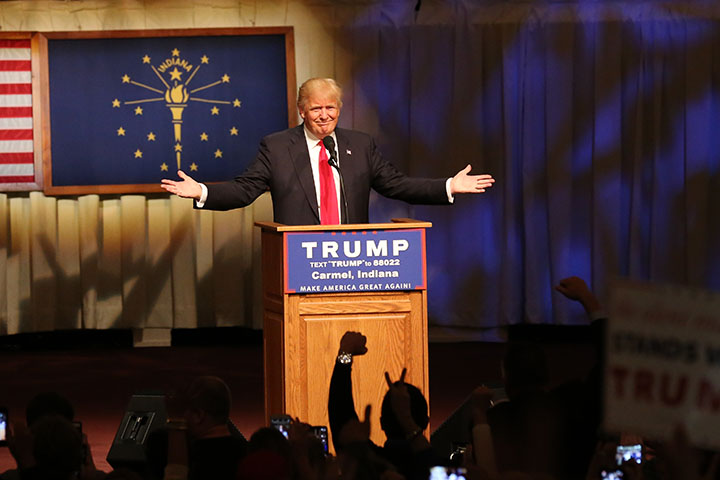 Donald Trump greets the crowd at a rally May 2. (Photo by Ann Marie Shambaugh)

Donald Trump is now the sole candidate running for the Republican nomination for president after a decisive win in the Indiana primary with 53 percent of the vote. 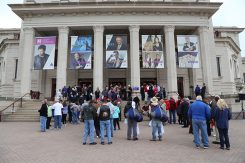 Crowds line up outside the Palladium hours before Donald Trump gave a speech May 2. (Photo by Ann Marie Shambaugh)

Carmel Mayor Jim Brainard, who was the co-chair for Gov. John Kasich’s Indiana campaign, previously urged voters to consider the fact that he believed Trump wasn’t likely to win in a general election against the Democratic nominee.

But on May 4, a day after Trump won all 57 of Indiana’s delegates and Kasich and Sen. Ted Cruz dropped out of the race, Brainard is now calling for unity.

“The Republican Party needs to come together behind its presumptive candidate,” he said. “We need to support him and help him be the best candidate he can be.”

Brainard spoke to media outlets across the globe before and after the election. Carmel was on the national stage as Trump spoke to a packed house of at least 1,600 people at The Palladium a day before the primary. Hundreds stood outside the concert hall to listen to the speech on loudspeakers.

Brainard sat alongside other city officials to watch Trump’s speech.

“It’s great to have a presidential candidate in the Palladium,” he said. “We were all over national TV. He said it was a beautiful place. It was a way to show off our hall and get Carmel’s name out throughout the country. It’s great for economic development.” 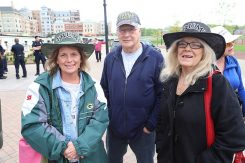 After the speech, Brainard said he spoke to Trump. The mayor said the billionaire real estate mogul understood that Brainard was backing a different candidate.

“He told me after the event he wants to get everyone on the same team so we can win the White House,” Brainard said. “He’s a very personable guy, and he’s very charismatic when he speaks. He certainly connects with his audience.”

Brainard also attended Trump’s victory rally at the Sheraton Hotel in Indianapolis on May 3.

“I stopped at the very end,” he said. “It was pretty much wound down. I was at the Todd Young victory party (for his bid for U.S. Senate) nearby and there were a lot of Carmel people there, so I said hi.”

Brainard’s preferred presidential candidate, Kasich, only received 7.5 percent of the vote, but that’s likely due to the fact that he decided to not campaign in Indiana after he made a deal with Cruz. The plan was designed for Cruz to win Indiana and Kasich to win other states to prevent Trump from sealing the nomination. The plan didn’t work and Brainard said that’s disappointing, because he compared Kasich to former Indiana Gov. Mitch Daniels, a man who Brainard greatly respects.