You are at:Home»Current in Zionsville»The Scoop honors Ordinary Heroes

The Scoop’s name is designed to reflect more than the fact that it’s an ice cream shop. 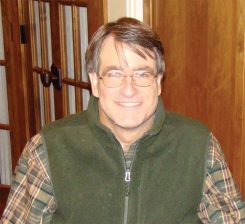 Bob Haimbaugh was selected as the first Ordinary Heroes Award winner at The Scoop. (Submitted photo)

In April, she launched the Ordinary Hero Award. The winners will have their favorite ice cream named after them for the month and 10 percent of the profit from sale of that flavor will go to their favorite charity. Their pictures will be displayed on an Ordinary Heroes wall.

For the first Ordinary Hero Award, Demaree selected her late brother, Bob Haimbaugh, who died at age 46 in February 2010.

“He has been my hero my entire life, and to honor his spirt and continue his legacy just seemed like the natural thing to do,” Demaree said. “This whole Scoop is for his spirit.”

The Scoop opened at 305 S. Main St. in June 2014. Demaree said The Scoop’s mission statement came from her older brother: To make others feel better about themselves, Zionsville, or the world in just one scoop.

Despite becoming a quadriplegic after falling from tree stand during a hunting accident in 2000,  Haimbaugh, a Carmel resident, left behind his wife, Michelle, and children Charlie, Samantha and Patrick.

“He was never, ‘woe is me,’” said Demaree, a long-time Zionsville resident. “He touched lives.”

Bob’s favorite flavor was Mocha Chocolate, and the 10 percent of the proceeds from April went to The Sam Schmidt Paralysis Foundation.

The May hero is Zionsville resident Lynn Eriks, who helped friends in need after being the first on the scene following a car accident in Zionsville. The family was on the way to airport when their van was in a bad accident.

“She immediately came and prayed over my children and I as we lay in pain and shock,” Nicole Adams wrote in her nomination. “Then, before I knew it she was loading up our suitcases in her vehicle and taking our dog to the vet to be checked out.  Lynn’s presence at that very moment not only helped to calm a traumatized mother, but it allowed my husband and I to ride in separate ambulances with our children.”