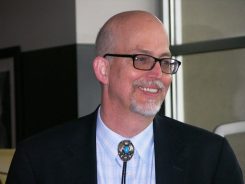 Mark Twain once said, “Write what you know.”  Writing about what Noblesville author Larry D. Sweazy knows – the art of book indexing – was what inspired him to write the Marjorie Trumaine Mystery series.

“Most people don’t realize that someone other than the author writes the index in the back of the book,” explained Sweazy, who has done that for 19 years, indexing more than 800 books for major publishers nationwide. “Indexing is an obscure writing form, as much science as art, and it made sense to me that an indexer would have a little bit knowledge about a lot of things, be persistent, and detail-oriented.”

In the second book, Miss Trumaine, a freelance indexer and North Dakota farm wife, faces another death in the community that pulls her into an unwanted investigation. A local librarian was found dead at work and everyone considered it suicide. But Marjorie can’t believe that Calla would be capable of taking her own life.

“As an indexer, Marjorie Trumaine has all essential qualities for an amateur sleuth in mystery fiction,” said Sweazy. “Creating her allowed me to combine my two passions, writing and indexing.”