You are at:Home»Current in Carmel»Carmel Community»Carmel looks at increasing recycling pickup 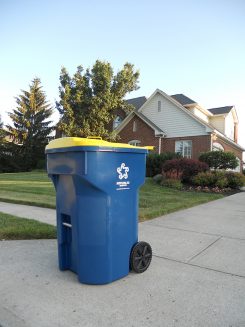 Carmel is considering increasing recycling pickup from biweekly to once a week. (Submitted photo)

The City of Carmel is looking at whether residential recycling pickup should be increased from biweekly to once each week.

In January, the Carmel City Council voted 5-2 to eliminate the opt-out for trash collection in the city, leading all residents to use the same trash collection services starting in 2017. Currently, Republic Services has the city’s contract, but residents could opt-out and use another service.

Under the city’s current contract, Republic picks up recycling every other week, but Sue Maki, manager of Environmental Initiatives & Education for City of Carmel Utilities, said some want to see the frequency be increased when a new five-year contract is done at the end of 2016. She said she believes residents want weekly recycling pickup, but cost is a concern for some. The change could necessitate adding two trucks and two full-time drivers.

“Hopefully, it wouldn’t cost too much, so we could increase recycling,” she said.

Maki said she didn’t want to speculate on what the cost increase would be for weekly recycling, but she said it would be very small. She said weekly recycling would help people remember to sort their recycling and stay in the habit.

“So much of our trash can be recycled,” she said.

Carmel Mayor Jim Brainard said he hopes to hear input from the public on whether they want increased recycling pickup.

“Some in the public would clearly like to see weekly recycling. Others don’t care,” Brainard said.

Any change in pricing would have to be approved by the Carmel City Council.

Carmel Clay Parks already has recycling in some locations, such as the Monon Community Center, but there’s talk of adding recycling bins to Carmel parks.