You are at:Home»Current in Carmel»Carmel Community»Carmel High School percussion clinic set for May 21 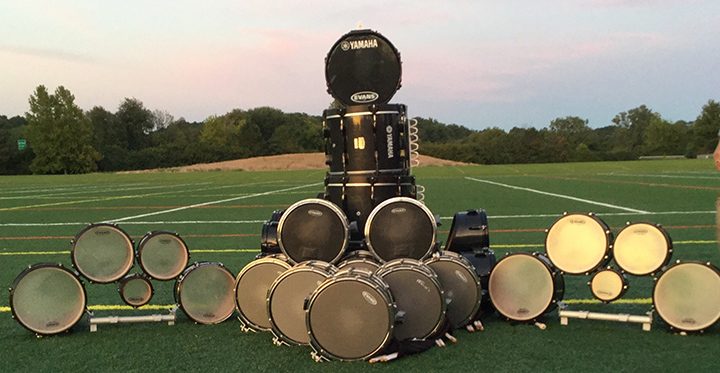 A drumline tradition includes building a tower with drums after each competition. (Submitted photo)

Although the Carmel High School Drumline is coming off its most successful competition season, there is still a little work to do.

“We went from sixth place in the A (novice) last year to second in the open so it was really a successful year for us,” CHS Drumline director Jeff Queen said.

There is one more bit of business, though, as the group holds its annual percussion clinic for boys and girls in fourth through eighth grades from 9 a.m. to 1 p.m. May 21 at the CHS band room. At the end of the session, the clinic participants will put on a performance for their parents.

“It will be a little more of like a show-and-tell for the parents,” Queen said.

The clinic will provide education on fundamental techniques on keyboards and marching percussion snare drum, tenor and bass drum.

“It’s a chance for the current students to get in and teach a little as well and work hands-on,” Queen said. “It’s pretty much a one-on-one ratio whether it’s adult staff members or one of the students that is able to work with these kids.”

Senior Danni Schottke said she plans on helping out with the percussion clinic like she has in the past. She hopes the clinic inspires the youth because she knows what marching band has meant to her.

“It broke me out of my shell of being a very introverted person,” Schottke said. “Marching band has been a great family for me over the years.”

Senior snare drummer Alex Bublick, who is auditioning for Michigan State’s marching band, will miss the clinic because he will be with the Iowa-based Colts Drum and Bugle Corps.

“Everyone in Drumline is like family,” Bublick said. “Everyone shares a similar interest. It’s a great environment to be around.”

Schottke and Bublick were among the drumline’s 24 members. The winter drumline competition begins after the marching band season ends in November.

To register for the clinic, visit carmelbands.wufoo.com/forms/2016-annual-percussion-clinic/. The cost is $30, including pizza and T-shirt. Register no later than May 14 to guarantee a T-shirt.