You are at:Home»Current in Carmel»Carmel Community»Trump to speak at The Palladium in Carmel

Donald J. Trump, the real estate mogul and frontrunner for the Republican presidential nomination, is speaking at The Palladium in Carmel at 4 p.m., Monday, May 2, a day before Indiana’s primary. 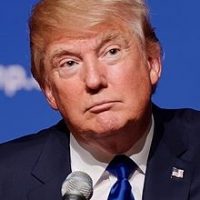 The doors open to the public at 1 p.m. and the speech is set for 4 p.m. inside the music hall. Attendees can register for tickets at donaldjtrump.com.

Attendees are asked to limit personal items and be prepared for increased security on site. No homemade signs or banners are allowed, along with professional cameras, tripods, selfie-sticks, large bags or backpacks. TV crews are checking in hours ahead of time as security rules have increased at Trump rallies due to previous protests and concerns.

Trump has held two previous events in Indianapolis at the Indiana State Fairgrounds, one of which featured former Indiana University coach Bobby Knight on stage.

Down the road from The Palladium, a Trump headquarters is open in a storefront along Range Line Road,  just south of 116th Street.

According to local historians, Trump’s visit will be the first public campaign event hosted by a presidential candidate within the city of Carmel. Hillary Clinton has visited the city, but for a private fundraiser.

Fred Swift, local historian, former politician and newspaper editor, did some research on presidential stops in the county.

“I seem to remember that Hillary Clinton visited the Mel Simon home when running in 2008. But, that should be confirmed with Mel’s widow,” he said. “Bill Clinton when President was at a golf tourney at Crooked Stick in the 1990s, and appeared at Carmel High School after leaving office.There ( were) several Hamilton Co . stops by candidates, but always in Noblesville. William McKinley, Teddy Roosevelt, Harry Truman and Barack Obama campaigned there.”

INDIANA IN THE SPOTLIGHT

Carmel Mayor Jim Brainard has spoke to media outlets across the world about Indiana’s upcoming primary. Brainard is one of the co-chairs for the Indiana campaign for presidential hopeful John Kasich, governor of Ohio. Brainard has said he doesn’t think Trump can beat the democrats in November so he believes it’s crucial that the GOP have another candidate in place in the general election.

Kasich and Ted Cruz have both been part of a plan to make sure Trump doesn’t reach the 1,237 delegates needed to clinch the nomination and that way the process goes to an open convention where delegates can pick the candidate.

As of May 1, Trump has 997 delegates, compared to 565 for Cruz and 153 for Kasich, who have both been mathematically eliminated since there are only 571 delegates left. Indiana has a total of 57 Republican primary delegates and 30 go to the winner statewide with the rest given out by district.

Brainard said he understands Kasich’s delegate position but the mayor would never tell anyone how to vote though. Previously, Brainard was critical of Cruz in interviews with Current in Carmel. Brainard would not say who he is planning to vote for.

Indiana Gov. Mike Pence said he plans on voting for Cruz but was careful to not criticize Trump or Kasich.

Some pundits have called Indiana make-or-break for the Trump or Cruz campaigns. Without an Indiana win, Trump could still reach the number of delegates needed since California — with 172 delegates — has yet to vote.

A recent NBC News/Wall Street Journal/Marist poll released on May 1, has Trump with a 15-point lead over Cruz in Indiana. The poll says Trump leads with 49 percent to Cruz’s 34 percent, while Ohio Governor John Kasich is behind both with 13 percent.

A previous poll released on April 29 from the Mike Downs Center for Indiana Politics had Cruz with a 16-point lead over Trump. The poll had Cruz with 44.8 percent of the vote to 29 percent for Trump. Kasich had 13.3 percent and another 13 percent stated they didn’t know who they were voting for.

Current in Carmel will keep you up to date on Trump’s rally on May 2. Reporter Adam Aasen will be there along with editor Ann Marie Shambaugh. You can follow Adam on Twitter at @adamaasen or Current in Carmel at @CI_Carmel.