You are at:Home»Current in Carmel»Carmel Community»Trump talks trade, jobs in front of thousands at Palladium in Carmel 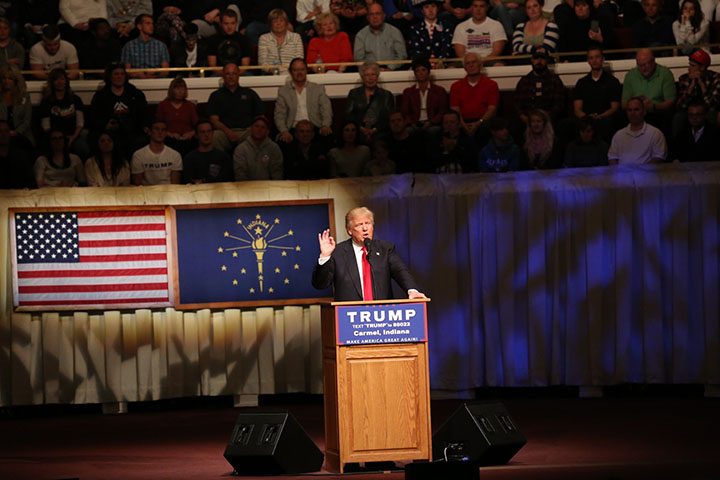 Trump on stage at the Palladium. (Photo by Ann Marie Shambaugh)

Donald Trump, the frontrunner for the Republican presidential nomination, spoke to a packed house at The Palladium in Carmel a day before Indiana’s May 3 primary.

It was the first time in Carmel history that a candidate for president has held a public campaign event within the city limits.

The Palladium, which can seat 1,600, was full and hundreds of people stood outside unable to get inside to see the real estate mogul on stage.

Fred “The Hammer” Williamson, former NFL defensive back, Gary, Ind.-native and star of numerous 1970s blaxploitation films, also spoke to the crowd in support of Trump on May 2.

Carmel Mayor Jim Brainard, who is co-chair of Gov. John Kasich’s Indiana campaign for president, was in attendance along with several Carmel city officials.

No protesters were seen inside the event and few congregated outside. The doors opened at 1 p.m. and Trump spoke at 4 p.m. for about an hour. He then left in his motorcade to make a 7 p.m. speaking event in South Bend. Prior to the event in Carmel, Trump stopped by Shapiro’s Deli for to eat a reuben.

Trump praised the interior of Carmel’s world-class concert hall and said he was impressed by the turnout.

“There are thousands of people waiting outside to get in here,” he said. “You folks must know more about real estate.”

Trump hit on familiar talking points during his speech. He shouted, “I’m going to build the wall” to the crowd’s applause and used nicknames “Lyin’ Ted” and “Crooked Hillary” for other presidential hopefuls Rep. Sen. Ted Cruz and Dem. Hillary Clinton. Other talking points included:

— Trump made fun of Cruz’s vice president pick, Carly Fiorina’s fall off a stage at a recent event.

“By the way, she fell off the stage the other day,” he said. “Did anybody see that?. And Cruz didn’t do anything. Even I would have helped her, OK.”

— Trump shot back at anyone who said he incites violence.

“Our rallies are the safest place in the world,” he said.

— Trump didn’t criticize Indiana Gov. Mike Pence for saying he would vote for Cruz because he said he still had nice things to say about Trump.

“That was one of the weakest endorsements,” he said. “I had to rewind the tape.”

— He made fun of Kasich’s eating style and said he tells his kids to eat, “tiny little bits.”

— He made fun of Kasich’s poll numbers.

“Kasich hasn’t had any negative ads because nobody cares,” he said.

The overarching theme of the speech was about bringing back manufacturing jobs and addressing the trade deficit with China.

“We can’t continue to let every nation in the world to think of us as fools,” he said.

Trump said other countries like China have new infrastructure thanks to U.S. dollars but he said America is behind.

Many pundits have accused Trump of wanting to start a trade war with China, but the business leader said he wants to trade, but wants better deals to be made.

“A conservative is supposed to want free trade no matter how bad we are being ripped off,” he said.

Outside of the venue, vendors sold Trump merchandise, from T-shirts and hats that say, “Make America Great Again,” to vulgar T-shirts with profanities and sexual references.

Michelle French, co-owner of Carmel Tattoo Ink, took her daughter out of school to see the Trump.

Bruce Calabrese, owner of Old Town Tavern in Carmel, said he came out to support Trump because he likes his straightforward style.

“He’s from New York so he tells it like it is,” he said. “He’s not afraid to speak the truth.”

Stephen MacKenzie, who is running against Congresswoman Susan Brooks in the primary, said he’s in attendance because he believes in breaking from the establishment like Trump.

“I want to help take our country back for our kids and tomorrow,” he said.

Charlie Sloan, originally from Carmel, is now a sophomore at Purdue and one of the leaders of his campus’s Trump group. He said it was the third Trump rally he’s attended. He joked that he missed the protestors.

“I don’t know, it’s a shame,” he said. “The protesters are pretty entertaining.”

Sloan said he thinks Trump will get the necessary delegates to secure the nomination, but if not he could run as a third party candidate which could be damaging to a Republican running for president.

“I think it’s in the GOP’s best interest to give him the nomination,” he said.

Another Carmel resident, Evan Schiffli, said he’s not a Trump supporter but he was interested in listening to Trump, who he thinks is the inevitable nominee.

“Trump very likely is a demagogue, but at the very least, he provided a great show this afternoon, and in a beautiful venue,” he said.  “I was also very pleased that there were essentially no hecklers. I saw one, a white female, calling Trump a racist, who became curiously silent when an African-American from Gary gave the preface. Regardless of your political opinions, it is never justified to shout down or attempt to silence your opponent in a free society.”