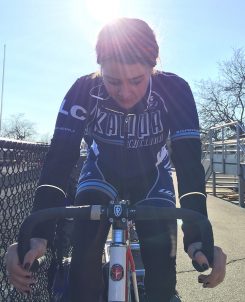 Allie Richards grew up riding horses. She sold her horse when she went to college but has switched her energy to bicycles, riding in Indiana University’s Women’s Little 500.

“Riding horses for about 10 years helped make logistics of cycling feel pretty natural and really helped me master riding on rollers, (which is) a type of indoor bike trainer that you have to balance on because you’re not attached to anything,” Richards said.

The 2014 Zionsville Community High School graduate was a member of the Kappa Kappa Gamma four-woman team that placed 14th on April 15 in the Little 500. This was the second time the sophomore rode in the race. She joined in 2015 when her sorority was looking for riders. Prior to that, she had never ridden a bicycle competitively.

“I was looking for something to help me get involved in the sorority, and I missed being on a team of some sort so just went into it pretty blindly,” said Richards, who was a cheerleader and competed in track and field for two years at ZCHS. “I stuck with it because I found I was pretty good at it.”

Richards rode about 30 of the 100 laps this season.

“We’re hopefully going to do some harder training to get prepared for next year,” Richards said. “I plan to do some road races in Broad Ripple and Indy this summer because I like road riding a lot.”

Over the winter break, Richards and her teammates had trained in San Diego, where one of the team’s coaches lives.

“Our sorority has a pretty good history. We’ve won five times,” Richards said. “We’re trying to improve our team and get back up there.”

Meredith McCall, one of her coaches, was on two winning teams for KKG.

“The best part is being part of such a huge tradition at IU,” Richards said. “The race is a lot of work and very nerve-racking, but having a huge crowd full of your sorority sisters, family, friends and coaches helps and making them all proud makes the race and all our training throughout the year worth the pain and time. It’s also such a great feeling to finish the race, and there’s a great sense of accomplishment that comes along with it as well.”