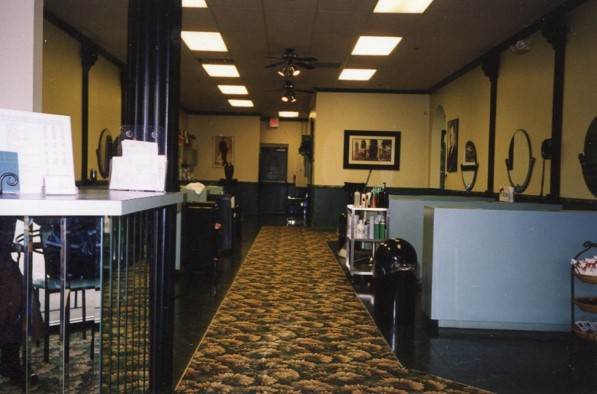 An inside shot of the salon years ago. (Submitted photo)

Micki and David Stirsman started out their salon with six employees in a 1,400-square foot spot on 136th and Meridian St. Nine months later, the couple expanded to 2,800 square feet when the spot next door became available.

“We’ve grown all different kinds of ways with the products we sell, the services we’re able to offer now, with the involvement with the community both with the Palladium and (Great) American Songbook (Academy), as well as the charities we help to support,” Micki said. “It’s been an interesting journey.”

Micki has been in the hair-dressing business for 35 years. David is an attorney and entrepreneur, primarily in real estate.

“I always was involved in training,” Micki said. “The training is what encouraged me to keep growing and multiplying. It wasn’t the ownership of the business.”

Salon01 quickly outgrew its space in its first location.

“We were busting at the seams over there, and they were waiting in line to pay us,” Micki said.

While looking for an office call center, David instead found a salon in Fishers for sale. So, they opened a second salon.

“We asked people who lived east of Keystone to start going to that location,” Micki said. “It worked great for what we needed it for, but I really missed the unity and camaraderie (of having one salon). So that’s when David started searching for a spot in the heart of Carmel, where we wanted to be.”

David said there was another reason.

“As an appointment-based business being on Meridian Street while U.S. 31 improvements were going to happen,” David said. “That was the impetus to get off of that street. We actually started looking in 2003 because they kept saying 31 improvements were imminent, but it just took them a really long time to do it.”

Salon01 has an apprenticeship program where stylists are certified in the Salon01 program as well as the state.