You are at:Home»Current in Westfield»Anastasia Rupp to perform with Indianapolis Children’s Choir 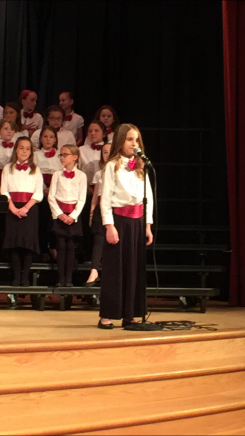 Anastasia Rupp has been singing with Indianapolis Children’s Choir for more than a year. (Submitted photo)

The Westfield community may be familiar with the Rupp family, as father Steve Rupp is on the board of directors for the Chamber of Commerce. But a smaller, younger member of the family is making an impact as well.

Anastasia Rupp is 10 years old, and she has a busier schedule than most adults. On Monday and Wednesday, after taking her fifth grade classes at the intermediate school, Ana goes to soccer practice with the Indiana Fire Juniors. Thursdays she goes to Indianapolis Children’s Choir to practice with the choir, and Tuesday and Thursday mornings before school, she practices for music rehearsals.

“I practice my singing more than I spend time on homework,” she said.

While managing school and her extracurricular activities, Ana is preparing for two concerts – a choir concert at 7 p.m. April 30 for a 30th anniversary performance with ICC at Clowes Memorial Hal, and a “Cinderella” musical with WIS, where she portrays an evil stepsister set for 7 p.m. May 12 in the WIS gymnasium.

Ana admits that although she enjoys the choirs, she prefers to perform alone.

“I like singing alone because other people can hear my voice instead of when I’m singing with other people,” she said. “I’m not nervous. I’ve just done so many performances that I’ve never had stage fright, even if I go alone.”

Her favorite song to perform is “Tutira Mai.”

“They sing a lot of international songs,” Steve said. “The higher choirs travel outside of the country, and (it) gives kids that don’t travel a lot a chance to travel. Ana’s choir stays domestic.”

Steve says with Ana’s activities and Natalia, their youngest daughter’s, gymnastics, there isn’t much free time.

Those wanting to attend the WIS musical can get tickets for $15 at the door May 12. For the ICC 30th anniversary performance, tickets are $13 and are available at www.icchoir.org.