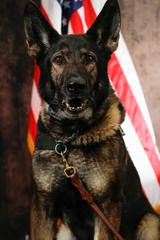 The department released the following statement:

“It is with deep sorrow that the Hamilton Co, Sheriff’s Office announces the passing of K9 Deputy Dibo. Dibo was taken to the hospital late on Monday, and it was determined that he was suffering from acute congestive heart failure, likely stemming from heart cancer, which is common in his breed. The treatment and prognosis left him with less than a 1 percent chance of recovery. The difficult decision was made to put Dibo down. Sgt. Dixon, Dibo’s partner, was able to be with Dibo as he passed peacefully.

Deputy Dibo spent seven years with Sgt. Dixon protecting him and the community. Deputy Dibo was hands down one of the best K9 Officers Hamilton County has seen!

Please keep Sgt. Dixon, his family, his shift mates and the K-9 team members in your thoughts and prayers at this difficult time.”