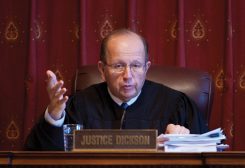 Justice Brent Dickson of Carmel has served on the Indiana Supreme Court since 1986. (Submitted photo)

Brent Dickson had no expectations of leaving the Indiana Supreme Court as the second-longest serving judge in state history when he was appointed in January 1986.

“I had no idea I’d be around 30 years from that time,” Dickson said. “The man who served longer than me left the court in 1853.”  Isaac Blackford served 35 years.

Dickson reaches the mandatory retirement age of 75 in July. The retirement will be effective on April 29.

Dickson was enjoying his private law practice in the Lafayette area when a couple of colleagues suggested he think about applying to be Supreme Court justice.

“I said, ‘Maybe when I retire (as a lawyer),’” Dickson said. “They said, ‘No. Think about it now. The commission has shown they are looking for some younger people.’ I threw my hat in the ring and was selected.”

There are five justices on the Supreme Court at a time. Dickson has served with 12 other justices during his tenure.

“One of the privileges has been working with my four colleagues, whoever they have been,” Dickson said. “We’ve been a great blend. Even if we don’t agree on everything in perfect alignment, we’re still able to remain friends and treat each other with respect and set a good example for lawyers who we think should get along together well.”

After Gov. Robert Orr appointed Dickson, he and his family moved from West Lafayette to Carmel because of the school system.

“Every case presents a new set of challenges,” Dickson said. “You realize that case is the most important case those clients will ever had that are involved in it. So it deserves our full attention.”

In retirement, Dickson will still work as a senior judge assigned to Supreme Court projects and plans to do some arbitration and mediation.

“I want to enjoy some quality time with my wife and being a grandpa,” said Dickson, who has nine grandchildren.