You are at:Home»Current in Carmel»Obituary: Edwin Lewis Duke 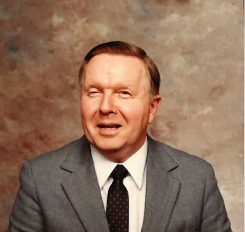 He graduated from Arsenal Tech High School and enlisted in the U.S. Navy in July 1944 at age 17 and served until 1946 aboard the USS Dayton Light Cruiser. He married JoAnn Yager, his wife of 68 years, Aug.  17, 1947, and went on to graduate from the Indiana University School of Business in 1950 on the G.I. bill; the only one in his family to accomplish this.

Ed spent nearly 50 years in the retail business. He worked for L.S. Ayres and Ayrway Discount stores (now Target) until starting his own business in 1977. He owned and operated the School House of Educated Wicker furniture store in Hobbs, Ind. retiring in 1997 to Bradenton, Fla.

He is survived: by his four children, Connie (David) Van Gompel of Solon, Ohio, Charles (Debbie) Duke of Carmel, Candi (Joe) Dziezanowski of Salisbury, N.H., and Craig (Linda) Duke of Fort Wayne; 11 grandchildren; eight great-grandchildren (with one more due in April); and a sister, Lenora Bowsers.

Ed loved his family and was most proud that all four of his children had graduated from college.  He was a natural with babies and loved being at all of the baptisms, weddings and graduations.  He was a member of Carmel United Methodist Church for more than 50 years, where he served in many positions.  Most recently, he became a member of Zionsville United Methodist Church near his care facility.

He was preceded in death by: his parents, brother James Duke; sister Gloria Alexander; and most recently, his wife of 68 years, JoAnn (Yager) Duke.