You are at:Home»Current in Fishers»Tigers game to benefit local pediatric cancer foundation 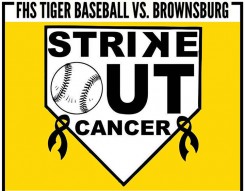 A Fishers High School baseball tradition will benefit one area family’s foundation and their commitment to enriching the lives of children with pediatric cancer and their families as the Tigers take on Brownsburg in their annual Strike Out Cancer game April 22.

“This is the first year we’re going to be working with the BEElieve Foundation,” FHS head baseball coach Matt Cherry said. “This will be great for our guys to see exactly where the money’s going to go to and our players can have a little bit more of a connection to it rather than a national organization just by being able to see what they do.”

The BEElieve Foundation was founded by Grant and Lynsey Romine in memory of their 4-year-old daughter, Henley, who passed away in 2013 after a three-year fight with stage four neuroblastoma, a rare childhood cancer. Henley received a Make A Wish trip to Disney World, and now the foundation named in her honor gifts fun day trips around Indianapolis to families with children battling cancer.

“Grant Romine is going to come out and talk to the players and share more about what their foundation does,” Cherry said. “It’ll be a little bit more of a personal connection for our players to see what they’re doing and see what the money’s going to go to.”

Henley’s brother, Cooper, will throw out the first pitch prior to the Tigers taking on Brownsburg, and fundraisers throughout the game will raise money for the BEElieve Foundation.

“We’ll be selling memorial-type cards at lunch during the school day for students. They can pay $1 and have a card on a billboard in memory of or in honor of a family member fighting through cancer or lost to cancer,” Cherry said. “We’ll donate per strikeout, we’re offering sponsorships where people can sponsor an inning in memory or in honor of a loved one and then we’ll also just be passing buckets around through the stands that night to collect some money.”

For more or to donate, visit BEElieveFoundation.org.