You are at:Home»Current in Zionsville»Joseph Maley Foundation programs benefit from Brackets for Good victory 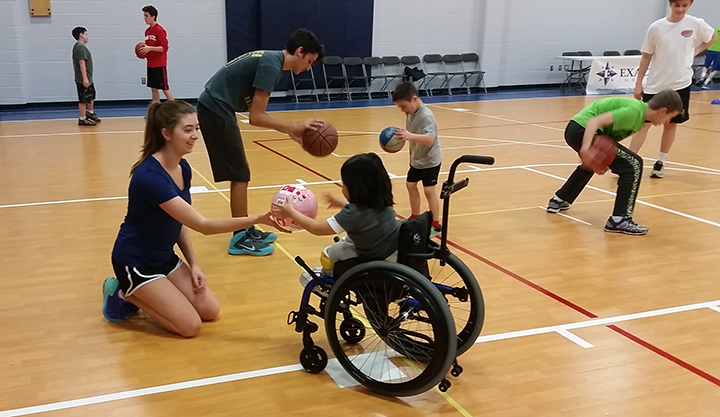 The JMFitness basketball program is one of many services offered by the Joseph Maley Foundation. (Submitted photo)

The Joseph Maley Foundation employed a good game plan to survive and advance.

The organization won the grand prize in Brackets For Good, a competition where Indianapolis nonprofits go head-to-head to out-fundraise one another in brackets set up like the NCAA basketball tournament.

Maggie Mestrich, JMF director of development and communications, said the Indianapolis foundation was formed in 2008 with the mission of serving children of all abilities.

“To participate in Brackets For Good was a great opportunity to generate some additional funds for our nine programs that we have under that mission statement,” Mestrich said. “One of the things that helped us be successful in Brackets For Good this year is we launched the Spirit of 76 campaign.”

The foundation was established by Zionsville residents Vivian and John Maley to honor their late son Joseph Maley, who was born with several disabilities.

“But (he) had the spirit and total and unequivocal acceptance,” Mestrich said. “Along with his disabilities, Joseph was diagnosed with leukemia at age 16. He actually passed away at age 18. We did the Spirit of 76 campaign to honor his July 6 birthday. We encouraged people to donate 76 dollars or seven or six dollars or whatever they could do to help us in our efforts.”

“We are planning to use that money toward staff and staff hours to help expand the capacity of our programs,” Mestrich said.

JMF has a staff of 13, which includes five full-time staffers, including executive director Vivian Maley, who does not take a salary.

Mestrich said JMF promoted its Brackets For Good fundraising through social media and a weekly newsletter.

The foundation also started a basketball league in March for the first time as part of its adaptive and inclusive athletics program.

“That helped us generate a lot of momentum,” Mestrich said.

The cornerstone program is disability awareness, which was started in 1999 by Vivian to help explain Joseph’s differences to Joseph’s four younger brothers’ friends.

JMF is also one of four national finalists for actress Jane Seymour’s Open Hearts Foundation contest. Seymour visited JMF in March and presented the nonprofit with a $5,000. Seymour helped JMF by narrating a video. Those videos featuring each finalist will be posed at celebratingopenheartscontest.com. Voting runs April 20 to 27. The finalist with the most votes receives $10,000 from the Open Hearts Foundation, whose mission is to empower people to turn adversity into opportunity.