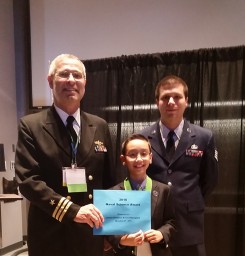 Jennifer Alcantara had serious doubts when her son Matthew approached her about his idea of building a wind tunnel for the Carmel Elementary School Science Fair.

“I said, can’t we just grow bean plants? Because I thought it was going to be way too hard,” said Alcantara, who was the CES Science Fair director. “I actually tried to talk him out of it. Even if he did build a wind tunnel, I didn’t think he could get measurable results. I’m glad he insisted.”

“My project was all about wind tunnels and testing aerodynamics for different vehicle shapes,” Matthew said.

Matthew, 11, captured the Central Indiana Regional Science & Engineering Fair first place trophy for fifth grade March 5 at Marian University. He was the only fifth grader sent to represent Central Indiana at the statewide fair.  At the Hoosier Science and Engineering Fair at IUPUI April 2, Matthew received the Office of Naval Research 2016 Naval Science Award for Excellence.

“We don’t know anything about engineering or physics at all,” Alcantara said.

That’s one reason she discouraged the wind tunnel idea at first, but Matthew’s love of cars won out.

“There was information on how the aerodynamics work, and I just thought that was interesting,” he said.

Matthew said the best part of the project was making a wind tunnel he can use whenever he wants.

“It’s awesome to have this awesome piece of equipment right in the house where I can use it,” Matthew said.