You are at:Home»Current in Carmel»Carmel Community»Carmel business supports Habitat for Humanity’s ReStore 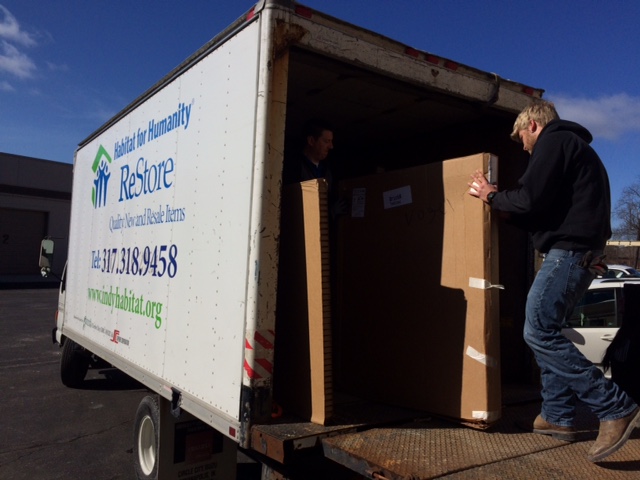 Kyle Morrison of Renewal by Anderson in Carmel unloads a delivery for a ReStore project. (Submitted photo)

Stephen Davidson is a firm believer in doing his share to give back to the community.

Davidson is owner of Renewal by Andersen in Carmel, which is an affiliate of the national business based in Minnesota. Davidson has the territory rights to Indiana, Michigan and western Ohio.

The Carmel resident said his business had donated windows to different causes and different homes in the past. This year they stepped it up with a large donation to Habitat for Humanity.

“We’ve donated a window here and there but nothing like this,” Davidson said. “At the end of the year, we ordered some extra products and donated to Habitat for Humanity. Had we sold the products, it would be over $50,000 worth of windows and doors. In the past, if we had something that was ordered in error, we would donate one or two here or there. In this instance, we made one large group for them.”

The recent donation of windows and doors went to Habitat ReStore. The windows will not be in Habitat homes but are used to support Habitat’s mission through the ReStore. Donations of quality household items to the ReStore from corporations and individuals help build multiple homes in greater Indianapolis each year.

“By donating a truck full of windows to the Habitat ReStore, Renewal by Andersen of Indiana supports our mission of partnering with local families in need of affordable housing and provides our ReStore with quality materials available to the community,” said Jim Morris, president and CEO of the greater Indianapolis Habitat for Humanity. “Because all proceeds from the ReStore benefit Habitat’s mission, corporate donations like the generous gift from Renewal by Andersen of Indiana make a significant impact on our ability to serve more future homeowners.”

Davidson said this seemed an appropriate way for his business to donate.

“Instead of donating cash somewhere, like we have in the past, this seemed a little more relevant to what we do day to day,” Davidson said. “We can offer someone our product as opposed to cash. The employees enjoyed it, and I think it will be part of what we do on an annual basis.”

Davidson, who moved to Carmel three years ago from Connecticut, said he has been trying to find area charities to support.

“We’re in discussion with Riley Hospital about doing some things,” Davidson said. “Since I live and work in town, I want to try to do something locally with the business and our employees. This is one item we want to do, and we’re looking to educate others so we can give back. We want to help anyone we can.”

Davidson has approximately 200 employees throughout the three states. Davidson said his business did something similar with the Habitat for Humanity in Grand Rapids, Mich., and is looking to do something in Cincinnati. “It’s something we want to do everywhere where we have a presence,” he said.

Davidson previously owned the Renewal by Andersen rights in Connecticut, which he sold to move to the Midwest. Davidson said he and his family love living in Carmel.

“I’ve never been to Indiana until I started the business, and I got lucky when I found Carmel,” Davidson said.