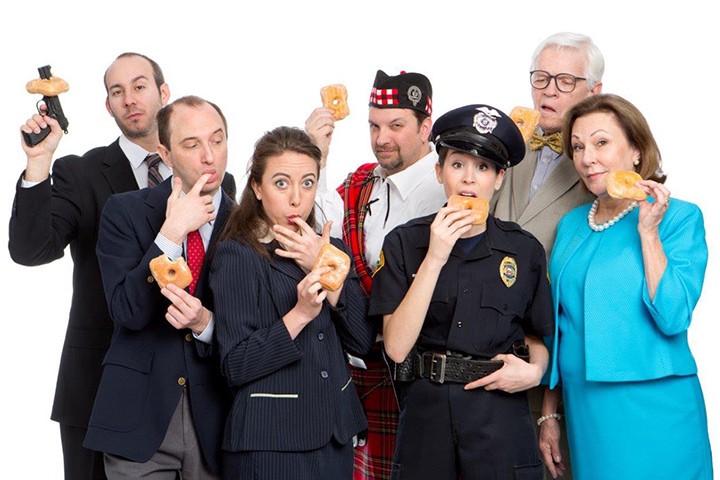 Darrin Murrell has been doing homework on farces in preparation for directing “Unnecessary Farce.”

“I’ve been rereading and revisiting other farces, not this particular show, but other fast-paced farce productions that I’ve been aware of and involved with,” Murrell said. “I’m trying to get the speed and stylistic elements of the show in my brain as I started to imagine these particular actors in those roles and putting this story up on the stage I know so well, and bringing all those puzzle pieces together. It’s been a nine-month process for me.”

Murrell is directing Actors Theatre of Indiana’s “Unnecessary Farce,” which is set for April 29-May 15 at The Studio Theater in Carmel’s Center for the Performing Arts. This is the first time Murrell has directed an ATI play, but he has performed as an actor there in the past. Murrell has directed at Beef & Boards.

“It’s a fairly new work by a Chicago actor and playwright Paul Slade Smith,” Murrell said. “It’s in the tradition of the great British farces that have been popular in world theater for hundreds of years. A lot of fast pace, slamming doors, mistaken identity and a lot of innuendo. Farces don’t carry any grand moral message that affects the human condition. They’re really meant as a distraction and a good laugh at an evening out at the theater, and this certainly is that.”

Murrell, who lives in Parker City, said the play has just been making its round on the regional circuit the past three or four years. Murrell said he believes it’s the first time the play is being held in the Indianapolis.

“It’s a rare bird over at ATI without Don (Farrell), Cynthia (Collins) or Judy (Fitzgerald) in it or involved in any way,” Murrell said, referring to ATI founders.

“The whole cast brings a wide range of experience and the best possible talent pool we could have assembled,” Murrell said.