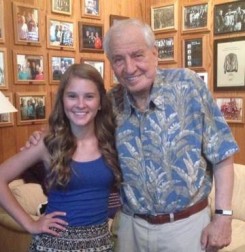 Singer/songwriter Sophia Joelle, a freshman at Zionsville Community High School, will have a song featured in the movie “Mother’s Day,” which hits theaters April 29.

A segment of her song, “Irresistible,” was chosen for the movie, which is directed by Garry Marshall. The song was co-written by Hunter Smith, and the movie is planned to release April 29.

A cousin of Joelle’s connected her and Marshall. She auditioned for him in Los Angeles a few summers ago. Marshall did not have movie projects at the time but contacted Joelle requesting a few songs from her EP while he was working on the “Mother’s Day” movie.

“Mr. Marshall picked out what parts of ‘Irresistible’ he wanted for the scene,” said Joelle, 15. “When I found out, it was really awesome!”

The scene in the movie that incorporates Joelle’s song includes a dad (Jason Sudeikas) watching his teenage daughter (Jessi Case) saying goodnight to her love interest (Grayson Russell). The two teenagers are outside listening to the song being played through the car radio.

“The song is about feelings for a person you may not want to have feelings for,” Joelle said.

Another one of Joelle’s songs, “Invisible Me,” has been recognized as a finalist in the 2015 International Songwriting Competition. More than 18,500 songs were submitted and “Invisible Me” made it into the top 15. “Other Side of My Soul” and “Irresistible” were selected as semi-finalists.

“It’s really cool I get to share my music with people through things like the movie and competition,” Joelle said, “but music is not just something I do for fun. It’s something that defines me and is a part of me.”