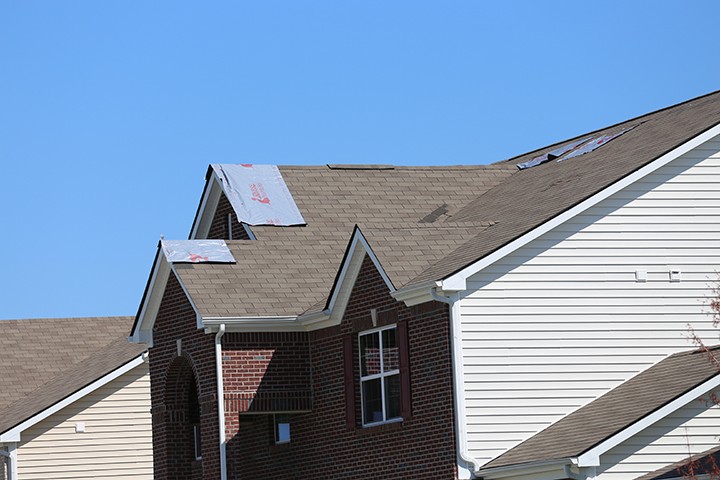 A Whitestown home received damage from the April 2 wind storm, like many others in the area. (Photo by Ann Marie Shambaugh)

After an April 2 wind storm, many roofs in Indiana were missing shingles, but Whitestown officials say the recent 50-mile-per-hour gusts highlighted a problem that had already become an issue in the community.

“Over the course of the last few years, we’ve had people call and talk about these blow offs of shingles and sidings in some of these developments,” Whitestown Town Manager Dax Norton said. “We’ve seen the majority of it happen in Walker Farms.”

Residents in Walker Farms, a less than 10-year-old subdivision in Whitestown built by Atlanta, Ga.-based Beazer Homes, reported several cases of roof shingle and side panel damage. Other communities in Whitestown also reported problems with shingles flying off during the storm.

Norton believes the problem isn’t a result of poor building materials or craftsmanship, rather improper installation of some of the materials.

“We believe the shingles of the required code are being put on, but it’s a matter of is it being installed properly?” Norton said. “I don’t think we’re talking about intentional, shoddy development by the builder. These houses are well built. The shingle issue can easily be solved, but I shouldn’t have to replace parts of my roof every year.”

Whitestown is hoping to address by problem by increasing its roofing inspection standards.

“What we are probably going to do is add that inspection process to our permitting,” Norton said. “It will cost money. It will increase the fee, but we think that it’s probably a good idea given the fact that we have these issues.”

In response to recent homeowner complaints, Beazer Homes has extended its warranty on roofs from one year to four years for damage done since January.

“We’ve been systematically going out and inspecting as quickly as we can with our roofers, fixing problems with our roofers as quickly as we can,” said David Goldberg, Beazer Homes vice president, adding that homes by many builders experienced damage in recent storms. “I think we have made a pretty aggressive move to go out and deal with any issues that are out there and stand by our homes and our buyers.”

In Zionsville, there were reports of some damage throughout the town, including at Zionsville Fire Station 93 and several Zionsville school properties, but none concerning specific subdivisions.

Yet even with full inspection on roofs, DeLong said that in severe winds even properly installed materials can fail.

“We do provide a roofing inspection where we’re looking for the installation techniques that were utilized for shingles going on, but you’ve got these wind events that are in excess of what the materials are designed for then there’s not much way you can get around that,” Zionsville Director of Planning and Development Wayne DeLong said.

Currently there are no Beazer Homes in Zionsville, but some are expected to be built in in a future development known as Hampshire.