You are at:Home»Current in Geist»Police, FBI still searching for robbery suspects 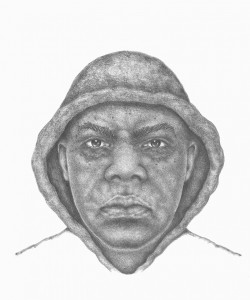 After working with witnesses, an IMPD artist drew this composite sketch of one of the suspects in the latest robbery at Lawrence’s KEMBA Credit Union. (Submitted photo)

Lawrence Police Dept. detectives and the FBI Safe Streets Task Force are continuing to ask for the public’s assistance in identifying the suspects involved in a series of armed robberies.

Investigators have enlisted the assistance of an Indianapolis Metropolitan Police Dept. composite sketch artist, who worked with witnesses to produce a composite sketch of one of the two suspects in the latest robbery at the KEMBA Credit Union, 5625 Sunnyside Rd., in Lawrence.

The depicted suspect has been described as a mid-20s male who was covered in dark clothing wearing a white mask and black hooded sweatshirt during the Feb. 24 robbery.

At around 10:30 a.m. that morning, two individuals armed with handguns entered the credit union and demanded money from the staff. After receiving money, the suspects fled in a vehicle that had been reported stolen earlier that morning on the northeast side of Indianapolis. The vehicle was recovered shortly after the robbery in the neighborhood east of the credit union.

The same method of operation was used by likely the same two suspects in a robbery of the same KEMBA Credit Union earlier in February and in June of 2015.

The Lawrence Police Dept. and the FBI Safe Streets Task Force are asking anyone who may recognize the suspects or knows anything about them to contact Crime Stoppers of Central Indiana at 262-8477 or at CrimeTips.org.