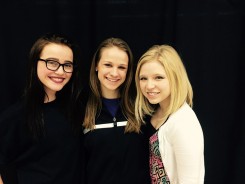 Carmel High School’s show choirs have been on the road displaying their talents the last several weeks from Alabama to Indianapolis to Chicago.

Now they come home to share it with the community. An Evening with Ambassadors and Accents will be held at 7 p.m. March 18-19 at CHS Dale E. Graham Auditorium.

The Ambassadors, an ensemble of boys and girls, had won three Grand Champions entering into its final competition. The all-female Accents concluded with a second place award followed by two Grand Champion trophies.

“It’s been an incredibly successful season,” CHS choir director Kathrine Kouns said. “It’s really rare that any high school show choir program would have one let alone two ensembles bring home Grand Championship trophies at almost every single week they go out. We have not signed them up for easy competition where they go and collect a trophy. We’ve made them work for it.”

Ashley Otero, a senior with the Ambassadors, has enjoyed the variety.

“We go anywhere from pop songs to jazz,” Otero said. “A lot of them are mash-ups. We base our set on one song ‘Come Sail Away’ and we make a story out of that song. We take you on journey.”

Otero said the audiences have responded well to it.

“I’m excited to perform it for our community because they are the ones who have always supported us,” Otero said.

Senior Emily Urbanski, in her second year with the Ambassadors, said she loves the set.

“This year is different than anything I’ve ever worked with,” Urbanski said. “The arrangements that JB (choir director John Burlace) has put together are phenomenal. I get excited every time we get to sing them. It makes each performance exciting. You might feel something different or act differently to a different note or chord. That’s a really cool experience. It’s always changing a little bit.”

Junior Betsy Sandifer, a member of Accents, said the theme is centered on the concept of playing games.

“It’s very light-hearted and fun,” Sandifer said. “It also can be taken on a deeper level depending on how the audience reacts to each song. Each song is a completely different style of song and dance.”

Kouns said the show is one of the best deals in town.

“This show is one of the hidden gems people might not even know is going on,” Kouns said. “You’re going to get absolutely professional level entertainment with choreography and singing that you sometimes can’t even hear at Clowes Hall or the Murat (Theatre). Just really incredible performances from our top students. A lot of them are going to continue on and do this as their profession.”