You are at:Home»Current in Zionsville»Back in the day: Zionsville flag helped symbolize town’s transformation 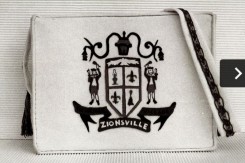 In 1971, Zionsville officials decided the town needed a unifying symbol to recognize nearly 20 years of renovation efforts. The result was an official town flag. A design contest sponsored by Farmers State Bank was held and a winner announced in May. Debbie Watts, a Purdue University sophomore at the time, was the winning designer.

The official flag featured red, white, blue and black colors. An eagle was prominent with town criers evident, probably a nod to the town’s renovation efforts that started in 1952. At the time, the chamber of commerce named a Colonial Village Reconstruction committee. The committee encouraged merchants to convert their storefronts to Early American. Many homes also followed the remodeling theme.

Twenty years later, about 45 businesses, services and professional people provided funds to make and purchase the town flags, which lined the business and residential areas.

“We want the flags out as soon as possible because we believe so firmly in basic American principles,” said Mrs. Phillip H. Brown, administrative assistant in the chamber of commerce, in a news article. She added that “we do a continuing spruce-up program,” implying that the town was hoping to draw out-of-town visitors to its neighborhoods through this renovation.

In recognition of these efforts, Zionsville was awarded in 1972 a George Washington Honor Medal from Freedom Foundation at Valley Forge, Penn. The award was given for the town’s and its volunteers’ efforts in transforming a sleepy rural hamlet into one with the feel of a colonial village.