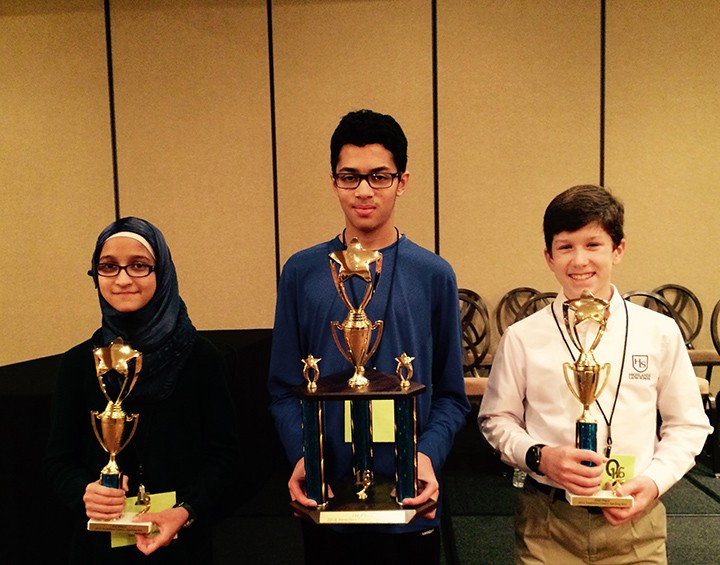 This time the competition was filled with a little more tension, but the result was the same.

Prasad correctly spelled pharmaceuticals to win the contest. It was a word he was confident he could spell.

Prasad, who didn’t miss any words in the 2015 competition, missed his first championship word, synovial (a type of joint).

“I never heard the word before, but the trick was the first letter for me, whether it was a c or s,”  Prasad said. “I picked wrong.”

However, he got a second chance.

“It was harder than last year with the final words,” Prasad said. “I think the words got harder to weed out that one person.”

The three finalists answered every word correctly for 15 minutes.

Prasad finished in huge tie for 50th in the 2015 national competition of 285 contestants.

“The preliminaries test is the one that caught me,” Prasad said. “I missed the benchmark average by three points.”

Prasad is looking forward to returning to the competition.

“I’ve been to D.C. a lot but that whole atmosphere at the spelling bee was new to me,” Prasad said. “It was really cool.”

Prasad plans to return to try for three-peat in county spelling bee.

“I’m definitely coming back, unless I win the national bee, then I can’t,” Prasad said. “But that’s not very likely.”

The key for Prasad is to take his time by asking for things such as a definition, pronunciation and use in a sentence.

“It’s just getting comfortable and organizing those letters,” Prasad said.

The county competition is sponsored by Williams Comfort Air and Mr. Plumber by Metzler and Hallam.

Column: How to avoid ‘udder’ confusion