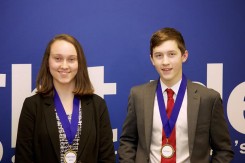 Genevieve McLaughlin and Jonathan Parker made it to regionals for the Bright Ideas Competition. (Submitted photo)

“We got to the regional finals where submissions from the Indianapolis area were selected that were the most creative and well thought out. We were able to present our idea sort of like a sales pitch,” McLaughlin said. “Our idea was called the Benefuel Program. It was basically sort of addressing the fact that the world is approaching a fuel crisis pretty soon, and our oil deposits will run out.”

The Benefuel Program was a proposition to transfer alternative energy sources by picking up fruit and vegetable waste via recycling from houses and farmers who don’t harvest all their crops. McLaughlin said their plan was to propose a way to process these scraps into ethanol to then be used as a fuel additive to fossil fuels in cars, trucks and airplanes.

Unfortunately, the project did not advance to nationals.

“We haven’t really thought of next plans. I think the biggest issue was feasibility,” McLaughlin said. “It was such a large scale concept compared to other teams, ours is more of a process than an individual product. We haven’t thought about developing it further, but we may work on it more and submit it next year.”

Both students plan on pursuing careers in STEM, and McLaughlin said they both hope to go to Purdue.

“My favorite part of the event was being able to meet and talk with some other STEM-minded kids, and to me, it was very inspiring to see other young people like ourselves who want to make a difference,” Parker said.