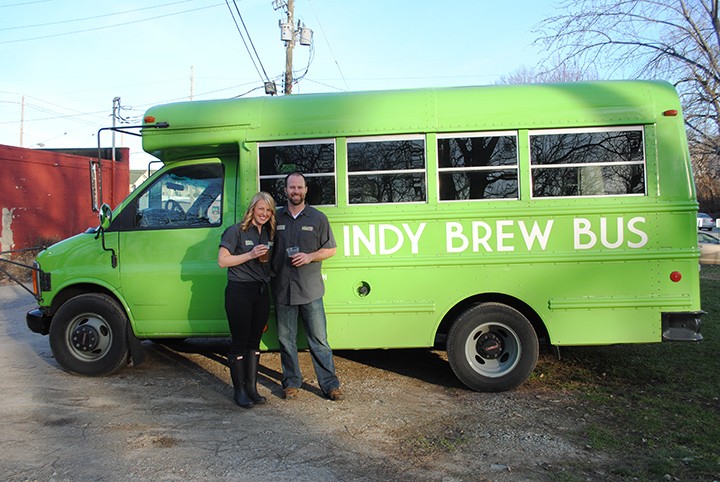 Megan, left, and Andy Bulla of Zionsville are the owners of Indy Brew Bus. (Photo by Anna Skinner)

Andy and Megan Bulla have always had a hankering for craft beer, but they didn’t realize it would be the main selling point of their business. That, and a big green bus.

The Zionsville couple launched Indy Brew Bus in March 2012. The brewery tour originally picked up guests only in downtown Indianapolis, but the couple expanded locations to include Broad Ripple (2013), the south side (2015) and Carmel at the end of last year.

“I’ve always been passionate about craft beer, and she had been working in tourism and PR marketing in downtown Indy,” Andy said. 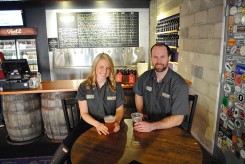 During a trip to San Francisco, the couple took a tour that included a bus picking them up from a hotel and driving them to different wineries.

The ticket purchaser can select which tour to take, and each tour stops at four different breweries. Overall, the tours cycle through 12 breweries.

“I did the guest service side of things so our two passions came together,” Megan said. “It was really important for us to hire drivers with knowledge in craft beer and can teach people about it. We want people to taste outside of their comfort zone.”

Megan said that when picking out the paint color, the company admitted nobody had ever chosen the bright green color that caught her eye.

“We want it to be noticeable,” she said with a laugh.

They launched Indy Brew Bus when their oldest child, Jackson, was 2 months old. Andy still works his full-time job as a physician assistant during the week and helps drive the bus and work with the breweries on the weekends. Megan does marketing for the business full time.

“My favorite part is educating people on beer and the getting the word out. Because I have a background in tourism, I love getting to show off our city,” Megan said. “I love when people come here and they walk away with a new appreciation.”

“A lot of craft breweries in Indy win awards on national and international levels, so you are getting award-winning beer,” Andy said. “Every place has a different feel. Some places are a big production brewery, some are more cozy, some have great outdoor setting.”

“A fun thing we are kicking off in February is we are partnering with the Indianapolis Museum of Art and one Thursday a month we are doing a beer and art tour, where a docent-led tour takes you to visit libation-themed art in museum, and you get to sample Sun King at the IMA,” Megan said. “Then you get on the bus and go to two more places. It’s a fun new thing for us to reach a new audience.”

Whereas normal Indy Brew Bus tickets cost $30 a person, the IMA tour will cost $45 to cover the museum’s admission price. Outside alcohol is not allowed on the bus, but beers purchased at the breweries during the tour are.

For more on tours and pick-up locations, visit indybrewbus.com.

Something you least expected about starting the business: How strongly a pretzel or boa feathers can stick to a bus floor.

How often you frequent Indy breweries: Four to five times each week.