You are at:Home»Current in Zionsville»Shrek, Jr. coming to Zionsville West Middle School 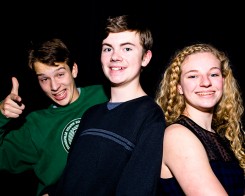 The Broadway musical version of the movie follows the same familiar storyline of the ogre, Shrek, trying to get his swamp back after a variety of fairy tale characters seek solace there. They’ve been evicted from their homes by the vertically challenged Lord Farquaad, played by eighth grader Noah Domogalik.

Shrek, played by Cody Lile, must rescue Princess Fiona. The musical adds to what is known about the princess, exploring her history of being trapped in a castle.

“I’m in love with the role,” said Olivia Broadwater, who portrays Princess Fiona. “It’s just great to see different sides of her.”

Lord Farquaad “is such an awesome role, so hilarious,” said Olivia, who added that Noah will spend the performance on his knees to shorten his stature.

After playing Sour Kangaroo in last year’s musical, “Suessical,” Olivia said she feels Fiona is a lot more like her actual personality.

“It’s fun to bring out the different sides,” she said.

This is the biggest cast ZWMS has had for several years with 71 students.

“I like how the show focuses more on the fairy tale creatures,” Olivia said. “It expresses their story.”

Also president of the school’s drama club, Olivia recognizes how much time is involved in the production and is excited to share the club’s talents with the community.

“People don’t always know how much work we put into the show,” she said.

“After all the work we put into it, it’s nice to have three shows,” said Olivia.